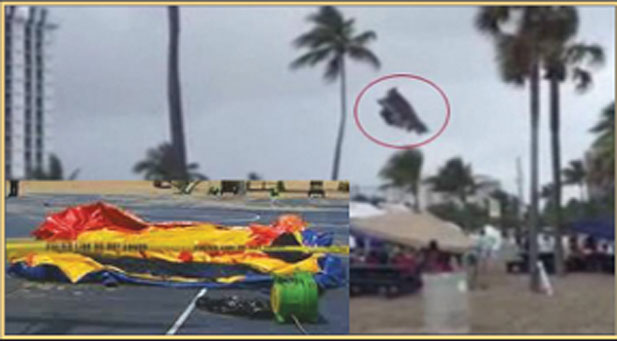 At approximately 12:30 p.m., officers working this event observed a waterspout off the shoreline and advised police dispatch. As dispatch was relaying the information to officers in the area, the water-spout came on shore and up-rooted two inflated bounce houses, which were located near the basketball courts in the park.

The waterspout caused the bounce houses to take flight, ejecting three young children out of one of the bounce houses and onto the sand. The other bounce house was unoccupied at the time of the incident. Both inflatables traveled westbound above the tree line, across four lanes of traffic on State Road A1A and landed in a nearby parking lot.

Members of the God Squad were instrumental in calming down the distraught family members of the injured children.

All three children were transported to Broward Health Medical Center. Two were treated for minor fractures and released. The third is listed in stable condition and will be held overnight for observation.

The identity of those injured will not be released.

No vehicles or other pedestrians were struck by the bounce houses.

No other injuries were reported.