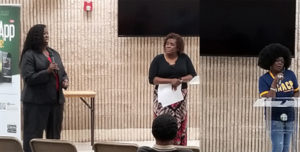 On Saturday, April 13th, a coalition of social justice advocacy groups sponsored a Voter Rights Registration Drive at New Mount Olive Baptist Church, 400 NW 9th Avenue. The drive was one in a series of such events the coalition aims to hold in communities across Broward County.

“Our goal is simple. Get the information out,” Marsha Ellison, President of the Fort Lauderdale/Broward County NAACP, replied regarding the coalition’s aims. “We have got to get the information out through the sources that the public listens to and we’ve got to be in the places where they gather.”

Last year Florida voters passed Amendment 4, reinstating voting rights to former felons with non-violent offenses, who have the terms of their sentencing. It is estimated that an additional 1.4 million Florida residents will be eligible to vote in the 2020 election. It is believed that the number of returning citizens in Broward County may be as high as 60,000.

It is why the coalition believes it was necessary to include a forum and Question and Answer sessions at the events. Gordon Weekes, Executive Chief Asst. Public Defender and Broward County Clerk, Brenda Forman were on hand to provide attendees with information on how to check their status, the steps to update it, and available resources.

“The issues are complex, but simple, clear communication is the best way to begin the process. An individual may want to vote, but he or she still harbors fears about interacting with the government. Some even believe it is a setup to get them to violate their court agreement. It isn’t easy to convince someone of that when they’ve been incarcerated for ten or more years” Weekes said.

A big concern for many attendees was whether they could be charged with a crime if they filled out a voter registration card but was denied due to ineligibility. While Miami-Dade District Attorney, Katherine Fernandez Rundle, has publicly stated that she would not seek charges in such cases, Broward County District Attorney, Andrew Meyers, has not publicly made a statement regarding his position.

The goal is to get the number of voters on the roll back to the Obama 2008 election level. Whereas the Supervisor of Elections office would make several attempts to contact a voter before purging them from the roll, the new administration is taking a more aggressive approach to purging rolls.

With the 2020 election a little over eighteen months away, the coalition continues to seek additional venues and events to spread the word.

Where were all these Black women who now are pouncing on R. Kelly when all these booty-shaking videos were being made. And it is not just the fellas, you should see some of the girls who are making hyper-sexualized videos who portray themselves and other women as bithches and hoes and sex objects. […]

Harriet Tubman’s face on the new $20 bill is priceless

President Obama said in his recent remarks that Harriet Tubman would likely greet the news she was on the $20 bill with little fanfare. […]

Virginia’s last Black-owned bank is gone after nearly 100 years in business. What happened?