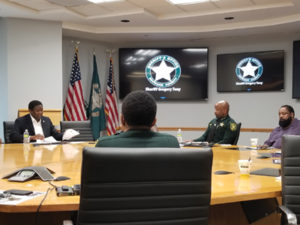 “Anytime a white deputy is involved in contact, using force with a Black youth, this thing blows up,”

Broward Sheriff Gregory Tony’s planned meeting on Saturday with members of Broward County Black Elected Officials and other community leaders was intended to be another opportunity for him to get better acquainted and hear their concerns. But, a Black teenager’s rough arrest by deputies in a local McDonald’s parking lot on Thursday, and a widely shared video of it, put a test on the young relationship.

On Thursday, a 15-year-old Black male and Broward deputies got into a struggle in the parking lot of a McDonald’s in Tamarac.

Other children stood by, recording the incident with their mobile phones. The videos show Deputy Christopher Krickovich pepper spray a teenager, then slam the child to the ground where two more deputies dive on his back and punch the young man repeatedly in the head before pounding his face into the pavement and pinning it down.

According to a written statement in the arrest report, the deputy states he was surrounded by a large crowd of teenagers at the McDonald’s.

“I had to act quickly, fearing I would get stuck or having a student potentially grab weapons off of my belt or vest,” he wrote. However, video footage shows Krickovich pushing a female bystander and stepping on what looks to be a cell phone. Next, he roams through the crowd, then exchanges words with the 15-year-old male before issuing a blast pepper spray in the student’s face.

The video of the one-sided beatdown has gone viral, garnering attention from national news outlets such as ABC Nightly News. On social media, celebrities from D.L. Hughley to LeBron James posted their thoughts about the incident and the repeated use of force by officers when it comes to African Americans.

Appointed to the position in January, by newly-elected Republican Governor Ron DeSantis, Tony becomes the county’s first Black sheriff. Tony understands his appointment has many black leaders looking skeptical and approaching with reserve. He had planned to take advantage of Saturday’s get together to highlight some of the actions he’s already taken. He was also hoping his quick response to some of their requests, specifically, increasing the number of African Americans within the department’s rank-and-file, would go a long way in proving his intent at being an honest broker.

Tony started the meeting by announcing Deputy Krickovich had been placed on administrative leave, pending the outcome of the investigation.

Although the meeting floor was open to discussion on any topic, most of the questions centered around the incident and BSO’s, or more specifically, Tony’s response.

Tony told the group. “There has been a large cry of, ‘Just go out and fire him. Get rid of him.’ And all these other things. Folks, it doesn’t work that way. You all understand that. There has to be an investigative process and due process elements so it’s going to be done the right way.”

Many County leaders, including Broward County Mayor Mark Bogen, have stated publicly that the deputy who slammed the teen’s head on the ground should be fired. Tony promises transparency but has asked for more time.

“I’m not going to sit here and try to brush anything under the table,” Tony said. “The facts are what they are. I just need them in a formal, written documentation that shows we have done our due diligence.”

Sources tell the Westside Gazette that the aggressive tactics used by Krickovich and his fellow officers are new self-defense techniques that the sheriff is pushing, and the officers are doing what they have been instructed to do. Additional sources also cite one of the officers involved has a history of harassing and arresting black youth without cause. Sheriff Tony has not yet commented on these allegations, but you can rest assure the Westside Gazette will be there front and center to give you the details.

Democrats: A party out of sync

Democrats: A party out of sync
[…]