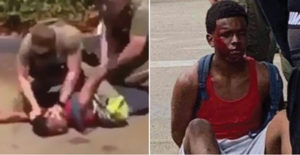 Several community leaders, clergy and parents have been extremely outspoken concerning the conduct of these deputies who are shown on video pepper-spraying, body slamming and punching students and forcefully smashing one face into the asphalt. This all occurred at a McDonald’s restaurant near J.P. Taravella High school. Broward Sheriff Gregory Tony recently stated he would have a “thorough investigation” concerning the deputies response to this situation.

Broward County’s Chief Assistant Public Defender Gordon Weekes, Jr. said: “The issue here is that improper police conduct should not be covered up or attempted to be covered up. The misconduct of the deputies and the tactics that were used were wrong, excessive and they are contrary to police training. In actuality it was police brutality on a child. If this type of conduct from our law-enforcement is condoned it will continue and escalate out of control. To have a student who was pepper sprayed in the face, slammed to the ground then the deputy sits on his back smashes his face into the asphalt repeatedly and then punches the student in the back and side of his head is unacceptable behavior and it will not be tolerated. “Abusive conduct of this sort is unacceptable.

“It may take some time but we will be transparent, and if folks need to be held accountable, it shall be done,” Sheriff Tony said in a video statement released last Friday afternoon.

The statement came soon after some Broward County leaders demanded that the Sheriff’s Office take immediate corrective action against deputies. One of the deputies involved  can be clearly seen inflicting bodily harm to the student as he is on the ground. Christopher Krickovich, has been placed on restricted duty awaiting the investigation. The other deputy is Sgt. Greg LaCerra, whose status is not certain at this time.

Westside Gazette Publisher, Bobby R. Henry, Sr. says, “A crime has been committed and we can see that. Now judgment is due. We understand due process and we also understand what it means to be subjected to police brutality and come out on the losing end. It is obvious that the excessive behavior shown by this deputy was unwarranted. Now we wait and watch to see what the outcome of a just system looks like or the endless negative actions of our law enforcement that says its ok to brutalize people of color, especially  Black people.”

One year after disappearance, advocates believe missing D.C. girl may still be alive

One year after disappearance, advocates believe missing D.C. girl may still be alive
[…]