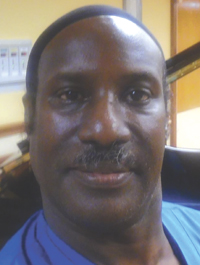 There’s nothing wrong with going to the park to meditate but City of Miami Police Officer Ioannys Llanes thought otherwise as he brutally victimized Retired Army Captain Oscar Julien-Riou as he mulled over his next career move.

On December 10, 2018 around 7:00 pm Julien-Riou was just sitting on a park bench minding his own business at Alonzo Kelly Park located at 1455 NW 67th Street in Liberty City, and Llanes pulled up and sat his patrol vehicle shining his light on Julien-Riou for nearly six minutes.

“Llanes got out of his vehicle and approached me and told me to leave the park because it was closed,” said Julien-Riou. “Public parks close at 10:00 pm. So how could I be breaking any law”?

As Julien-Riou attempted to explain to the officer that he was just videotaping himself, Llanes alleged that Julien-Riou “threw something to the ground.”

“The officer just used this as an excuse to attack me,” said Julien-Riou. “The officer manhandled me, and threw me to the ground, and the next thing I knew I was handcuffed for no apparent reason.”

Next, Julien-Riou says the officer called for backup, and a K9 unit arrived and searched the area for drugs that the officer claimed he threw to the ground.

Alonzo Kelly Park is one small square, with just a few benches turned inward so while Llanes had Julien-Riou under surveillance, he could noticeably see there was no criminal activity transpiring.

Furthermore, there’s no playground equipment, therefore, the police had an unobstructed view of the entire park and subsequently nothing was found.

Incidentally, Julien-Riou lives two doors down from the park.

When the Sergeant arrived, he ordered that the handcuffs be taken off of Julien-Riou, but later he was re-handcuffed because the officers said they didn’t feel comfortable with the cuffs being off.

Julien-Riou pleaded with Llanes, telling him that he was a retired Army Captain, and that he was hurting him.

He even offered to show the officer his ID, his camera, which by the way, was still rolling and captured the entire episode where Julien-Riou’s civil rights were violated.

Consequently, Julien-Riou was charged with resisting arrest – but after retaining the services of Attorney Rawsi Williams, ESQ., R.N., the Prosecutor officially dropped the charge.

“Llanes gave an unlawful order, and without cause brutalized, battered, falsely arrested and falsely imprisoned Julien-Riou despite his compliance with the officer’s order,” said Attorney Williams. “Officer Llanes, the City of Miami, and all other officers and responsible parties must be held accountable.”

Coincidentally, Williams is a Veteran, Minister and Registered Nurse.

Williams  says she’s determined to seek the truth surrounding the arrest of her client no matter where that line falls. “Here, it falls squarely on the side of Julien-Riou,” said Williams. “Llanes violated Riou’s civil rights and charged him with resisting arrest. Riou had never been arrested in his 63-years of life.”

A complaint has been filed with Internal Affairs of the City of Miami Police Department.

As of press time the Westside Gazette has not received a comment from the City of Miami Police Department concerning Oscar Julien-Riou.