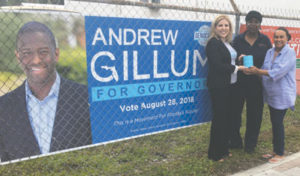 Jennifer Gottlieb, Political Director at Andrew Gillum Campaign for Governor, receives a generous donation from Sonya Burrows Electric and Sonia Henry-Robinson of the Westside Gazette, who co-hosted a community fish fry fundraiser that brought in thousands of dollars to the campaign from a community of proud people who were willing to give whatever they had. Both the Burrows and Henry families are business owners with deep roots in the community.