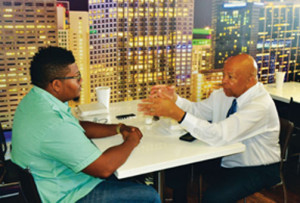 The exclusive no non-sense interview with Congressman Elijah Cummings

After a tasty meal at Lorna’s Caribbean and American Restaurant in Miami Gardens, FL, Congressman Elijah Cummings shares a few critical thoughts about the upcoming election and the need for young voters’ participation.     Photos and story submitted by Generation Next

What message are we sending to our children if we do not exercise our right to vote?

What principles are we demonstrating if we refuse to vote because we have reservations about both major-party candidates?

What legacy are we leaving for our community if we allow Donald Trump into office?

“Our children are the living messages that we send to a future we will never see,” said Congressman Cummings. Our duty is to prepare our children, those that are our blood and those that are not, for what is to come in the future. Also, it is important to educate them on what has taken place in the past so that it is not repeated.

They need to know the harsh reality that our people were severely mistreated, abused, ostracized and died for the opportunity to vote.

If we do not express the importance of being an active participant in voting rather than a pissed off commentator, we have failed future generations. Congressman Cummings also added, “We’ve always recognized that Black lives mattered, but we’ve set a profound statement that we want criminal justice reform.”

Due to the events that we’ve all seen displayed on our television screens, social media pages and in our own neighborhoods, the dire need for change has never been stronger.

The attention that has shed light to the injustices that are occurring on a daily basis has caused dialogue to occur amongst the people that can make change happen.

As a community, we have to have enough perseverance to see the whole process through. Bringing it to light is only the preface of what needs to take place. “You have to find a way to turn protest into policy,” said Congressman Cummings. “Hold us accountable!”

The presidential race is undoubtedly clouded in controversy.

Secretary Hillary Clinton has admitted to making mistakes concerning the mishandling of emails that contained confidential information. She has also received flack for backing the 1994 Violent Crime Control Act signed by her husband, then-President Bill Clinton in which thousands of people were sent to jail and prison with stricter sentencing laws and mandatory minimums.

Since then, she has been supporting new legislation to reduce mandatory minimum prison terms due to the effects the bill had on many families, especially families of color.

Her opponent, Donald Trump………..do we even need to go there? His repeated use of “law and order” are code words to an immensely dark past revealed in Ava Duvernay’s.

“Look, one of them is going to be President.” Cummings continued to weigh on both candidates and Clinton’s efforts to remedy issues that have devastatingly affected the Black community. “So if I am going to take a chance on one with history, the person who’s going to appoint the next Supreme Court Justices, I’d rather take my chances on that person (Hillary). We’ve all made mistakes. Let me go to somebody that tries to fight discrimination as opposed to somebody that has discriminated against African Americans from the jump.”

For people that think that business is going to be conducted as usual even if Donald Trump is elected as president, they are sadly mistaken. “Trying to get him [Trump] to first of all see me. Second of all respect me. And then help me to create the life that I want for my children and generations going forth. I think I have a far better chance with a Hillary Clinton than a Donald Trump.”

Build your business with faith and focus

Build your business with faith and focus
[…]