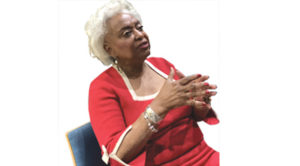 With all of these intricate parts, which includes counting the votes and matching the signature among others, how is the public sufficiently educated on this?

“When people come to our community forums, we give them opportunities to hear about or to see what we do with the ballots. A ballot comes in for example “Citizen A”. Ok we see and take his ballot. One might think that we put them over there. NO, you have to go through the system to determine that Citizen A is a registered voter. It’s not that easy; you have to go to the system to determine eligibility, you got to crop that signature by going to another innovative system that checks his signature on file to determine if it matches. There is another system that has to open the envelopes, another innovative piece of equipment which we use to cut open the envelope. You can’t use a hand paper cutter to open up 299,000 envelopes – no, no, no, no, that’s not logical. So we open up the envelope, put the ballot over here so you can’t see that this is Citizen A’s ballot, then it goes back to the through all of that and see that we have a good signature it matches and all that, we have to send them back to the high-speed counter. Re-member, we got all of this stuff going on and we have three different languages on the ballot. There is a lot of stuff going on and we have to get this done at a certain time.”

From an average citizen’s perspective, we don’t see all of the nuances that it takes to assure a fair and equal election. You have just informed us of all of the steps, are all of those steps necessary and if you had to change the dates on the process of election what would you do?

“Yes, we do that is in the legislature, and we do have to verify every voter that we have all of their signatures and everything. Yes those steps are needed and I would change the date. I would take it back probably to around early voting date. People got bent out of shape over the recount and who won on election night; you don’t win on election night. We don’t have all of the tabulations for this. By the time the state wide elections were over and everybody got all of their ballots counted, there were some close races and in state wide races everybody has to be involved in the recount and it’s pressure. Even then, being involved in a recount  may not change things and usually it doesn’t flip it.

When you look back at your accomplishments that were not reported, what are you really proud of, that you have done, that has not been documented, that has been under the radar screen?

Our voter outreach program We created ways where we could get into the communities through neighborhood partnership committees and  anybody could attend. We would share with them what we were doing. We’re also required to do high school voter registration for the entire school system so we made a connection with all of the social studies departments. The board made a resolution that gave the supervisor of election office the go ahead to conduct high school voter registration in all of the high schools. The students and their chaperones were trained in the entire field of voter registration. Through the Broward Education Communications Network (BECON), we created a virtual voter educational program that alleviated the need for students to leave campus to be trained.

“We also created a software to educate the students on the elements of citizenship. We brought in people from the immigration office to talk to the students about how to become citizens and to encourage the parents to talk to them about citizenship. We received a national award for election officials for our voter registration program. Another thing that I’m proud of is I was a part of the training program for election officials in the state of Florida so we created a program called the Masters Certified Florida Elections Program. My leadership team and I, 13 of us received State certification from the Masters Certified Florida Elections Program.

With all of this knowledge and all of your non-recognize achievements someone would have the audacity to say that you were incompetent.

“Those are “buzz” words that some people identify with Black people to say that you are incompetent and not articulate so those are those buzz words that they lay on a Black person, you know boy those are the worst people.”

If you could look back and see where you might have created a pitfall what is it that you could say it was if it is something?

“ I don’t know like I mentioned earlier I’m not a person that would throw my people under the bus but they were two instances where I think the staff felt down on their responsibilities but I don’t go and say oh yeah this person oh yeah… One thing it was, still concerning the ballot. This, this whole issue has been going on about two years where we are under some type of scrutiny some type of lawsuit I honestly think it’s Republican generated now that I think back on it but, that’s neither here or there because you have to serve everybody. Everything we do is guided by state statutes in a book and it is called the elections laws of Florida and that’s like a Bible you just keep it next to you at all times, and we use it.”

This has certainly been a learning experience we had no idea of what your staff and yourself have to go through in order for us to have an election. The elements of counting and the recounting it’s mind boggling.

How is your family holding up?

“Actually my family is doing much better but, doing the height of all of this they were like crazy. Because they didn’t like hearing their mother’s name come out of the mouth of the guy who is the president in DC they just didn’t like it so they came home. We have two daughters and they came home. The Broward Sheriff’ Office provided 24 hour security. I was escorted to work and home. We start getting these threatening phone calls from the trump up mob and these calls were pretty rough.”

We want to first thank you Dr. Snipes for allowing us to come together and tell your story. We do know that you have been under some malicious scrutiny, vicious personnel attacks and some slanderous accusations. Through it all we wanna know who sister Brenda Calhoun Snipes is and how is she weathering this storm […]

Leaders are shaped by several things, most especially the people around them as they move from childhood to adulthood.  The values we are given, the character we see modeled and the principles we are told to live by.   These things become anchors of our lives. […]