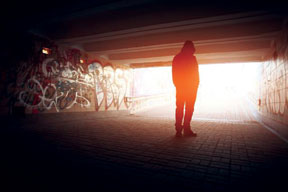 The news was as tragic as it was shocking. Sandra Bland is dead. The response from supporters of the movement to end police brutality was immediate: outrage that another Black life was lost as a result of police overreach and possible misconduct. Yet, the story’s next act was equally disturbing. Her death was ruled a suicide. The ensuing chaotic discussion from pundits to public forums was a reflection of how unsettling suicide is—particularly among the Black community.

The rate of suicide among African Americans stands at 8.0 per 100,000, slightly below the national average. However, Black boys account for over 82 percent of these deaths by suicide and their overall rate is on the rise. While these statistics paint a clear picture of some within the Black community being in pain to the point of considering suicide as the best viable option, the ferocity with which many attempted to deny the possibility of Bland’s suicide indicated a strong suspicion that foul play was at hand but also implied that suicide forfeits a person’s right to be fully cherished and pain acknowledged. If the latter represents beliefs within the Black community, a crucial question remains: how can we elevate the importance of Black lives closest to the edge of self-destruction?

The story of suicide is often narrated by shame. Shame is a force that prompts involuntary retreat into what is likely a distorted self-perception and places a person further from the people and supports that can potentially restore a sense of wholeness while easing psychological pain. Historically, the Black community has faced numerous challenges that have attempted to undermine the integrity that a valued person possesses.

The pressures of navigating prejudice, stereotypes of hyper-masculinity or over-sexualized femininity, and the daily stressors and traumas that arise from living in violent and impoverished communities make it difficult to tolerate vulnerability when strength is a necessary ingredient for resilience. Yet, it is the combination of life’s pressures which can lead to intense psychological pain and the growing fear of others learning that the pain has become overwhelming that prevents many in the Black community from connecting with the professional help that can steer them toward life-preserving solutions.

The remedy for shame is multifaceted but often begins with a simple concept: validation. Showing empathy for the deep pain a person feels while acknowledging the pain is only one component of a multidimensional person can spark opportunities for healing that otherwise are invisible to people blinded by shame.

This is such an important step toward supporting a person struggling to believe his life matters that psychiatrist Christopher Shea encourages use of shame attenuation during assessments of suicide to ensure the people feel comfortable enough to discuss their thoughts. Our ability to collectively attenuate shame, or make it less of an obstacle to a person seeking help, may be the spark for a mental health revolution that many of us desire but collectively have trouble attaining.

Imagine parents matter-of-factly asking their troubled child whether she has contemplated suicide because they understand asking about it doesn’t make suicide more likely but simply reduces shame and opens an avenue for help. What if mental health professionals followed the lead of psychiatrist Sidney Hankerson and developed projects like his Community Partnered Approach for Depression that uses federal funds to train pastors and other clergy to identify depression in the Black community while bolstering churches as a sanctuary for spiritual and mental healing.

If the voices of both the activist fighting for change and the person in pain fighting to stay alive are equally heard, then we truly demonstrate Black Lives Matter regardless the circumstance.

The much acclaimed feature-length film, “Pardons of Innocence: The Wilmington Ten,” will have its national debut during the CBCF Annual Legislative Conference this Friday, Sept. 26 at the Renaissance Hotel across from the Walter E. Washington Convention Center in downtown Washington, D.C. […]

Renowned civil rights and Black political journalist George E. Curry, the dean of Black press columnists because of his riveting weekly commentary in Black newspapers across the country, is being remembered this week as a legend. […]