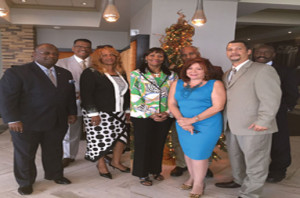 The state’s oldest and largest African American media organization consists of the state’s most influential African American media reaching over four million Floridians each week. While “majority” newspapers are struggling with dwindling subscriptions and readership, Black newspapers have a steady stream of readers who rely almost totally on their publications for information important to them.

It’s common knowledge that Black newspapers are read by four to six individuals before thrown away.

The December anniversary meeting was held in the BB&T bank’s downtown office in Orlando compliments of Regional President Tony Coley and lunch was hosted by Ron Oates, executive director/CEO Boy Scouts of America Central Florida Council. Oates shared the need for a stronger presence of the Boy Scouts in the Black community and for a relationship with the Black Press. “We are doing some great things in the ‘Hood’, however we do not have a relationship with the press that covers these areas,” stated Oates. “We hope that today that will change,” he continued. Most of the publishers were Boy Scouts and understood the important value of the youth organization and committed to supporting an awareness program.

African Americans make up 16 percent of the Florida population. FABOM has been the eyes, ears and voice of African American Floridians in a variety of ways. It has held forums with Florida gubernatorial, legislative, US Senate and Cabinet officers to get answers on issues of major importance to the community. It plans to issue a Report Card on candidates and elected officials. It is planning its February meeting in Tallahassee where they will also meet with state lawmakers, the Governor, Attorney General, Treasurer/Insurance Commissioner and Secretary of State, who is Florida’s chief elections officer.

Bishop Victor T. Curry, senior pastor/teacher of New Birth Baptist Church Cathedral of Faith International in Miami, Fla. and the president/general manager of AM 1490 WMBM, a media pillar in the community in South Florida owned by New Birth Broadcasting Corp. Inc. is the newest member of FABOM.

“To have a voice that covers the entire state of Florida from a Black perspective and owned by Black people is a great thing. Not only does it give balance to reporting it also gives voice to a people overlooked by main-stream media,” said Bishop Curry.

In this critical election year, FABOM is committed to keeping African American news consumers informed and educated. “Our job is to be ready for this election year. We want the elected officials and others to know that we will insist that our constituents are not ignored or dis-criminated against. We know that Black Lives Matter, and we want to make sure our quality of life is the best it can be,” said FABOM President Bobby R. Henry, Sr., publisher of the Westside Gazette in Fort Lauderdale.

“Police Chief Raimundo Atesiano’s  actions were intended to give his community a false sense of security and were a betrayal of his oath to protect the residents of Biscayne Park and all the people of Miami-Dade County…” — State Attorney Katherine Fernandez Rundle. […]

King, a Howard University School of Law alumnus who has risen to prominence in Hollywood, shared his journey from talent agency mailroom to entertainment company CEO, during this year’s Charter Day Convocation at the historically Black university. […]