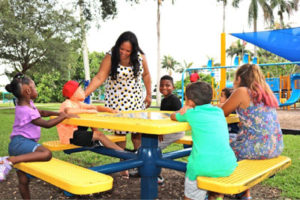 Parkland continues to draw national attention as parents of two slain Marjory Stoneman Douglas High School students vie for the School Board of Broward County’s District 4 seat, occupied by Abby Freedman since 2012. Lori Alhadeff and Ryan Petty, parents of 14-year-old daughters, Alyssa Alhadeff and Alaina Petty respectfully, are running on platforms focusing on school safety, accountability, and transparency. Motivated by the tragic loss of their daughters, who were among the 17 students and staff killed in the mass shooting on Valentine’s Day, both candidates hope to shield other parents from future tragedies by allocating resources to ensure schools remain safe spaces. Unfortunately, it seems only wealthy, predominately white Parkland may benefit.

“There is a focus on Parkland and safety, but we have over 40 other schools in our district without the resources Parkland has.” said Tennille Doe-Decoste, the third candidate for the District 4 seat. A human resource professional with Haitian, Cuban, and African American ancestry, Doe-Decoste has experienced firsthand the lengths a community will go to maintain the status quo where educational resources are concentrated in white, moneyed areas.

“I was warned not to run because ‘this seat belongs to someone wealthy and white’,” said Doe-Decoste, “Of course, that motivated me even more.”

Originally from Long Island, New York, Doe-Decoste, relocated to Broward County in 1999. A married mother of three, two of which are MSD graduates and one beginning her senior year in August, Doe-Decoste is an experienced professional with a master’s degree in Human Resource Administration and Development from Barry University and a bachelor’s degree in Public Administration. She is passionate about public service and helping others. 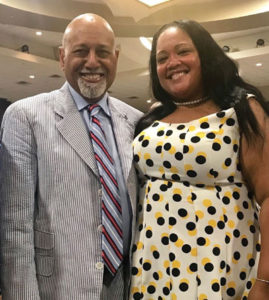 “I think God put that in my heart and placed me in a position to use me and help others.” She explained, “I love helping people. That’s my niche.”

As the Assistant Director of Parks and Recreation for the City of Miramar, Doe-Decoste has had the pleasure of interacting with children throughout the year via winter and summer camps, afterschool programs, recreation, and athletic programs. In addition, she has garnered considerable experience working within large county and city budgets, an important skillset for any School Board member.

Doe-Decoste admits her family has not escaped the tragedy at Stoneman Douglas unscathed. Her son’s best friend since third grade, 17-year-old Joaquin “Guac” Oliver, was killed during the mass shooting.

“He was my baby,” said Doe-Decoste, “He was at family vacations, my daughter’s sweet sixteen, and my 40th surprise birthday party. He was like a son to me.”

Her motivation to run for the District 4 seat came when her youngest child, who has special needs, asked if it was safe to return to school.

Like other candidates, Doe-Decoste admits safety in schools is important, but there remains a myriad of issues in her district and throughout the county her opponents are not acknowledging.

“In District 4, we have a school where 99% of the students are receiving free and reduced lunch,” Doe-Decoste pointed out, “The administrators are not being heard, the teachers are not being heard. They don’t have what Parkland has and they are being forgotten in this race.”

Doe-Decoste is making a big push to focus on mental health services in the school, believing programs, such as the pilot program for metal detectors at Stoneman Douglas, are only band aids over larger, more deeply rooted issues.

Although her opponents aim to eradicate the district’s Promise Program, Doe-Decoste believes it needs revamping not elimination. An initiative created to address the reality of the school-to-prison pipeline, the program seeks to serve students who have committed behavioral infractions that would normally lead to a juvenile delinquency arrest. Interventions include counseling, conflict resolution instruction, restorative justice supports, and community agency referrals.

Doe-Decoste believes, in theory, the Promise Program is innovative, particularly for Black and Latino students who are disproportionately disciplined in schools across the country. As a woman with a Black and Latino background, this issue is of personal importance.

“It’s a second chance for the child,” explained Doe-Decoste, “The child makes a mistake and is sent to the program where the issue is to be addressed and he or she is placed back in school. That is the goal.”

However, she admits the execution has been lacking and follow up nearly nonexistent, resulting in disastrous consequences for the student and the larger community.

“The Promise program is a great program, but it needs to be tightened up, tweaked, and definitely updated.” She added.

Doe-Decoste is also calling for accountability and transparency, a cry that has been reiterated from various districts throughout Broward County and emphasized by the $800 million school renovation program approved four years ago that has not come into fruition.

“I have had my son in the past call and say it is too hot and the AC is not working,” she said, “I understand some of finances went to new tracks and band equipment, but students shouldn’t sit in classes for 90 minutes without AC. The money should go towards fixing these schools where there is mold.”

Doe-Decoste emphasizes the importance of getting out and voting not just in District 4, but in all districts. The overwhelming national media coverage of the mass shooting in Parkland has shifted the school district’s focus to accommodating the needs and demands of that small but financially powerful corner of Broward County, much to the detriment of the rest of the county. Parents, students, teachers, and administrators will have to fight through the vote to ensure their needs, such as school renovation, lack of resources, and low test scores, remain alongside the concern for Parkland’s safety.

“If you do not vote and are not in Parkland, they are not going to pay attention.” adds Doe-Decoste, “We need someone who will make sound decisions for everyone and has experience doing it.”