I am not 100% sure why, but we have all heard that dating co-workers or professional colleagues could become problematic. Yet, studies show that nearly 25 percent of U.S. married couples met at work. It’s no secret that work is where most single people spend a great deal of their time, and we are in an era where people have been conditioned to prioritize their career advancement. Whether you work in corporate America or own a small business, most of my peers are making a conscious decision to establish themselves professionally before thinking too seriously about being in a committed relationship. 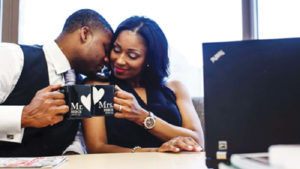 Given the amount of time we spend working, I believe work romance is often unavoidable. In fact, according to CareerBuilder’s Annual Valentine’s Day Survey, although declining in numbers, office romance is here to stay. The survey revealed that “office romances have hit a 10-year low with approximately 36 percent of workers admitting to having dated a co-worker, down from about 45 percent.”

No matter how taboo, work romance appears, dating a colleague can be comforting as most workplace attractions are based in the sharing similar mindset, work ethic and even financial status. Initially, these commonalities could increase mutual respect and decrease typical relationship friction. Nonetheless, singles should not enter a relationship with a coworker or colleague without research and establishing rules.

Between the internet, pop culture magazines, and barbershop conversations, there is no shortage of advice on the matter, but here are a few of my favorite rules for Romance on Your Scene:

The bottom line is work based romances will happen. Regardless of the rules or risks, human attraction will prevail. Have fun; proceed with caution, and happy dating!

MISTAKES WILL BE MADE Just Do It Anyway

MISTAKES WILL BE MADE Just Do It Anyway […]

As the saying gose, April showers bring May flowers, but I am hopeful that March’s confusion will bring clarity in April or the seasons to come. With Michael Jackson, Nipsey Hussle and Jordan Peele making headlines for good, bad and the different, I am left wondering: What is the purpose of it all? Coming to terms with the need to simplify and declutter, over the weekend, I sprang out of bed early in the morning and began tossing old stuff, organizing important stuff and reflecting on impactful stuff. The community outreach, the influencer engagement and the everyday grind all became just stuff, i.e., pictures, papers, and doohickeys alike. But what is the point of all this stuff? It’s amazing how reflective spring cleaning can be, and here is what I discovered: […]