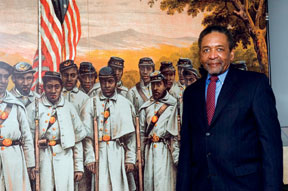 Frank Smith, Jr. emerged from a Mississippi jail and learned that he was wanted — by Uncle Sam.

The 20-year-old civil rights worker had been locked up for three weeks in Greenwood for helping Blacks register to vote.

“After I was released from jail, I called my mother at home in Georgia to tell her I was okay,” said Smith, 73, of Washington, D.C. “She told me I had a draft notice to go to Vietnam.”

It was 1963. Draft board officials asked if he’d had any scrapes with the law. Smith said he had three federal cases pending, thanks to his civil-rights work.

“They told me they didn’t want me in the Army,” Smith recalled. “I said, ‘Thank you very much!’ and I went back to Mississippi.”

Nevertheless, Smith has always appreciated service members — especially those who shielded rights that they were denied.

Thirty years after he left the South, Smith helped establish the African American Civil War Memorial and Museum on Washington’s V Street, NW. It honors the war’s 209,000 Black fighters. More than 200,000 people visit it annually. Construction will soon begin on a $4-million expansion.

The museum hosts programs and events on the Civil Rights Movement, including last year’s service for Julian Bond. He, like Smith, was a founding member of the Student Non-violent Coordinating Committee (SNCC).

Smith said the museum links Civil War heroes with those who stood up after Rosa Parks refused to give up her seat on that bus. “They were the first civil rights activists,” he said of the soldiers.

From 1962 to 1968, Smith battled on Mississippi’s front lines. He was threatened, beaten and saw friends die.

“You had to be able to function in an environment of terror and not be paralyzed,” said Courtland Cox, 75, of Northwest Washington, who worked with Smith in Mississippi.

Born in 1942 on a Newman, Georgia, peach plantation, Smith’s father farmed and drove a truck. His mother, Flora, now 96, reared their eight children.

Smith excelled as a student and debater. He was 12 in 1955 when he learned about the racist murder of Emmett Till, 14, in Money, Mississippi. Smith related to the martyred Chicago youth.

“Growing up in Georgia at that time, for a black boy, was a frightening experience,” Smith said. “Learning how to act around white people was a survival skill.”

At 16, he entered Morehouse College. He became president of the Atlanta Student Movement and helped establish SNCC.

Smith journeyed to Holly Springs, Mississippi, to register voters in 1962. He lived at Rust College and worked with its NAACP chapter.

“Sundays were our big days,” said Leslie Burl McLemore, 75, a close friend. “We … traveled to churches to talk to people about registering to vote so they could be first-class citizens.”

Their demand to be seated in place of Mississippi’s all-white delegation to the 1964 Democratic National Convention was blocked. However, related negotiations with the White House hastened passage of the Voting Rights Act of 1965, which “revolutionized Mississippi,” Smith said.

“White people didn’t stop lynching and beating people because they got religion. They did it because African-Americans with voting rights established that they could pick and choose who was in office and get elected themselves,” he said.

Smith then helped launch a Head Start program, created jobs through a cleaning and sanitation-supplies service and erected a tent city for sharecroppers who were evicted from their homes on a plantation after a 1965 wage strike. He lived among the workers for a year while he raised $40,000 to build homes and a community center.

In 1967, he tutored children who integrated public schools near Greenwood.

“I drove them to school in my Volkswagen bus,” he said. “They were singing freedom songs, then jumped out and ran into the school. I told my wife, ‘We can go now.’ ”

Smith headed to Washington, D.C. in 1968. He worked in public-policy research and served on the school board. Smith was elected to the D.C. Council in 1982 and served for 16 years.

Smith became fascinated with Black Civil War soldiers in Mississippi after working with a descendant of one. In 1999, he became founding director of the museum.

Married with three children and nine grandchildren, Smith stays in touch with Mississippi.

One of the students he drove to school in 1967 recently retired as a teacher. Another is a Memphis police lieutenant. She recently brought a group of children to the museum.

“You never know how you will impact the life of another,” Smith said. “She had been one of the children all those years ago. Here she was, and she brought young people with her. It was a great moment.”