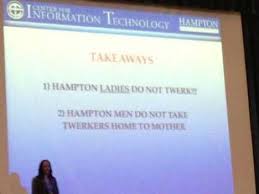 “Hampton ladies do Not twerk,” read a slide presentation welcoming Hampton University’s freshman to orientation. The dance made infamous on YouTube, and even more notorious by Miley Cyrus during her VMAs performance, is apparently not appropriate for the young ladies of Hampton University.

Several photos making the rounds on Twitter seem to confirm that twerking was a part of Hampton University’s orientation, according to Business Insider, which specifically noted these specific points.

Hampton Ladies Do Not Twerk!!!

Hampton Men Do Not Take Twerkers Home To Mother

In a statement, Hampton University denied that twerking was banned from both campus and the Instagram accounts of their students, which was previously reported, but confirmed that the dance was addressed in a freshmen orientation class to get student’s attention and warn them about the pitfalls of social media:

There is a picture of a slide circulating on social media sites that was a part on a presentation to Hampton University freshmen. The slide has been taken out of context. The presentation was on social media and cyber bullying and was titled “Sharing Your World Technologically.” The presenter was cautioning students about posting information and or pictures, that would tarnish their brand, on social media sites. The slide referenced “twerking” because of recent events and to get students’ attention. There was no statement about banning any form of dance or expression.

Although some may’ve criticized the slide presentation, it seems that Hampton should be given credit for setting high standards and teaching young ladies how not to embarrass themselves on social media. The lecture on the “Dangers of Twerking” seems more relevant now than ever before.

Some students have become ‘numb’ to violence

The different reaction might be because children have been forced to deal with violence when their minds should have been focused on the simpler things in life.
[…]

Students: Time is ripe to add gender to gun debate

It’s time to listen to the students. Across the country, teenagers have walked out of classes, stood in holy silence, and delivered stirring speeches calling out their elders for failing to prevent their schools from becoming shooting ranges for raging men. […]