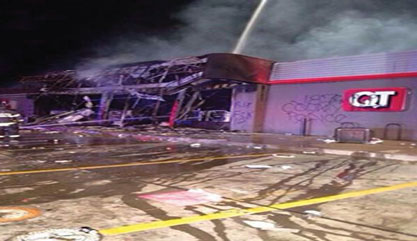 WASHINGTON (NNPA) – The shooting death of Michael Brown, an unarmed Black teenager, in Ferguson, Mo. by Darren Wilson, a white police officer, was as much as the product a century of housing segregation spurred by federal, state and local policies as longstanding tension between Blacks and police, according to a new report by the Economic Policy Institute (EPI).

Richard Rothstein, a research associate at the non-partisan think tank and author of the report, said that the long pattern of housing segregation was not an accident.

The report said that, “In St. Louis these governmental policies included zoning rules that classified white neighborhoods as residential and Black neighborhoods as commercial or industrial; segregated public housing projects that replaced integrated low-income areas; federal subsidies for suburban development conditioned on African American exclusion,” and restrictive covenants that made it illegal for whites to sell property or even rent to Black families in certain neighborhoods, despite their relative incomes.

St. Louis ordinances that deemed Black neighborhoods suitable for commercial development that was barred in the white suburbs contributed to the slum-like conditions found in the inner city.

“Not only were these neighborhoods zoned to permit industry, even polluting industry, but taverns, liquor stores, nightclubs, and houses of prostitution were permitted to locate in African American neighborhoods, but prohibited as violations of the zoning ordinance in residential districts elsewhere,” stated the report.

The report noted that the Federal Housing Administration (FHA), established during the New Deal and crafted to support white homeownership, denied those same opportunities to Blacks.

The EPI paper included analysis of the FHA’s impact on Black homeownership released by the United States Commission on Civil Rights’ (CCR) in 1959.

“Nonwhite home buyers and renters have not, however enjoyed the benefits of FHA mortgage insurance to the same ex-tent as whites. According to testimony given before this Commission, less than 2 percent of the total number of new homes insured by FHA since 1946 have been available to minorities. Most of this housing has been all-Negro developments in the South… Although the relatively low participation [of ] nonwhites has in part been due to their lower incomes, FHA bears some responsibility,” stated the CCR report. “Of great significance in this respect are FHA’s policies with regard to the discriminatory practices toward Negroes of real estate boards, homebuilders and lending institutions.

For the first 16 years of its life, FHA itself actually encouraged the use of racially restrictive covenants. It not only acquiesced in their use but in fact contributed to perfecting them.”

The 1959 CCR annual report continued: “The 1938 FHA Underwriting Manual, which contained the criteria used in determining eligibility for receipt of FHA benefits, warned against insuring property that would be used by ‘inharmonious racial groups,’ and declared that for stability of a neighborhood, ‘properties shall continue to be occupied by the same social and racial classes.’ The Manual contained a model restrictive covenant which FHA strongly recommended for inclusion in all sales contracts.”

The EPI report said that although many of the laws that encouraged housing segregation were prohibited in the late 20th century their effects still linger today.

Rothstein said that there’s no way to raise the achievement of low-income African American students as long as they’re locked into segregated, high-poverty schools.

Rothstein said that because the segregation of metropolitan areas nationwide and “the creation of virtually all-Black low-income communities like Ferguson was not a result of “White Flight,” and instead caused by specific governmental policies, the remedies will also require government intervention.

“It’s a mistake to think that the problems being protested in Ferguson are simply about the interactions between police and Black men and boys in the community,” said Rothstein.

Rothstein continued: “Unless we understand how Ferguson went from being a all-White suburb to a virtually all-Black suburb we’re never going to be able to get to the root of the police problems or any other problems that the community faces.”

Kristine E. Guillaume was appointed to lead the Harvard Crimson making her the first African-American woman to become president of the paper since it launched in 1873, the news outlet writes. […]

Lincoln Motor Company launches ultimate car clubhouse in Frisco Lincoln Experience Center Opening Is a Homecoming for Dallas ISD Arts Magnet Grad Earl Lucas, a chief designer for the Lincoln Motor Company, performed extensive work on the new Navigator. (Lincoln Motor Company) By David Wilfong (North Dallas Gazette/NNPA Member) The Lincoln Motor Company recently unveiled its new “Lincoln Experience Center” at The Star, Dallas Cowboys’ world headquarters in Frisco. The Lincoln Experience Center is intended to be the ultimate car clubhouse, where visiting patrons can enjoy a premium beverage and peruse the latest offerings from the automaker. The interior of the center is filled out in style. The walls and floors reflect luxury and surround a beverage station formed in an abstract homage to a vehicle hood. Color swatches are displayed like modern art on the walls, and interactive multimedia stations help visitors familiarize themselves with everything Lincoln. Of course, floor models of the latest Lincoln vehicles also reside in the two-level center. When it came time to introducing the latest Navigator, a young man stepped forward and began by proclaiming himself, “the biggest Dallas Cowboys fan in this room.” Earl Lucas, chief exterior designer for the Lincoln Navigator, grew up in Dallas—Oak Cliff to be specific—and the opening of the new center was a special day for him. “Dallas is my home,” Lucas said. “My parent’s only sister and friends still live there; to come home and be a part of the opening of the Lincoln Experience Center is a narrative that I could have never written for myself. Growing up in Oak Cliff, if someone would have told me that I would be designing cars for Lincoln, I would have told them, ‘I don’t believe you.’ I grew up a big-time Dallas Cowboys fan and to see the Lincoln Experience Center as part of that campus, just outside the Cowboys Ring of Honor… warms my heart and makes me feel a sense of accomplishment. God is good.” Lucas is a graduate of Dallas ISD’s Booker T. Washington, a high school that once served as the African American high school in Dallas, but in recent years is known as an “arts magnet.” Graduates have included many famous musicians who are household names, but Lucas was a part of the visual arts program, whose alumni may not be seen as often on TV, but who make their mark in various industries, as well. “My experience at Booker T. Washington was only filled with creative freedom and a place that allowed my interest in art to blossom into the career I have today,” Lucas said. “‘Arts’ [as it was referred to when I at-tended] allowed me to be sur-rounded by teachers and students that enjoyed painting, jewelry making, dreaming of ‘what if’ and, most of all for me, drawing. When I finished and went on to College for Creative Studies [in Detroit, Mich.], my understanding and abilities of artistic fundamentals was more advanced than the incoming students. In essence, ‘Arts’ gave me an advantage and prepared me for success as a car designer by exposing me to different artistic expressions.” Following college, Lucas dove into the auto industry with the Ford Motor Company, which also owns the luxury Lincoln brand. “To work for a premium brand like Lincoln is truly a highlight in my 19-year career at Ford Motor Company,” Lucas said. “After completing a three-year international assignment in the [United Kingdom, living in London], I was requested to return to the United States and assigned to the Lincoln Motor Company. My role as a Chief Designer came by way of working on a number of significant programs for the ‘Blue Oval.’ I am blessed to have designed and worked on many programs and acquired the skill necessary for the role of Chief Designer.” With that role came the opportunity for the one-time arts student to put his mark on one of the premiere SUVs on the road. The Lincoln Navigator is not only packed with creature comforts on the inside, the exterior of the vehicle is the result of meticulous planning, as Lincoln wants it to stand out at first sight. “When it comes to the design, the feature I am particularly proud of is the signature face or front end of the Navigator,” Lucas said. “Lincoln products are all about seduction and human surface language, so creating the Navigator’s face was a big challenge…literally. The scale of the grille and size of headlamps by definition can be imposing and intimidating. However, we were able to create a confident face that speaks Lincoln and gives a sense of protection to the passengers on the inside.” While his career path has followed a wide track from Oak Cliff to London and back, Lucas said that “Big D” is always on his mind, and he makes a point to remind himself of his home turf every single day. “In my office is a huge photo of downtown Dallas,” Lucas said. “I think of Dallas often and consider the lessons learned on her streets integral to my accomplishments. Know this Dallas— no matter my travels, my design assignments and our final products—I am forever linked and take her everywhere. My growth started from that origin and I hope that she is proud of me.”

The Lincoln Experience Center is intended to be the ultimate car clubhouse, where visiting patrons can enjoy a premium beverage and peruse the latest offerings from the automaker. […]