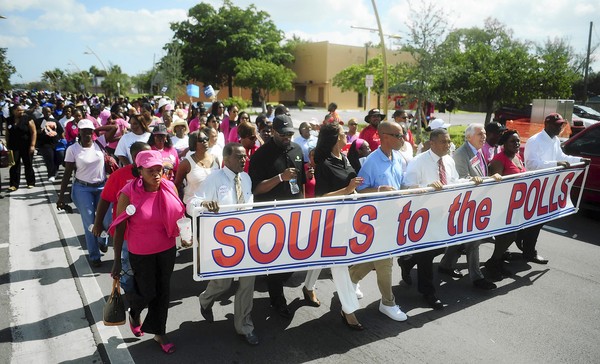 By Mike Clary   On a day punctuated by echoes of the civil rights movement, hundreds of people poured out of churches after services in South Florida’s historic black neighborhoods Sunday to march to the voting booth, intent on honoring a right for which ancestors shed their blood.

“People have died so I could do this,” said James Gadsen, 74, a deacon at New Hope Baptist Church, the rallying point for the mile-long walk down Sistrunk Boulevard to the polls in the African-American Research Library in Fort Lauderdale. “Too many people have given up too much for me not to go vote.”

In Boynton Beach, scores of parishoners gathered at St. John Missionary Baptist Church and other houses or worship and were bused to various polling sites.

“We do not make an endorsement, but we urge people to consider a candidate who would do what Jesus would require,” said the Rev. Nathaniel Robinson, pastor of Greater St. Paul AME Church, who led his parishoners to the polls in Delray Beach.

Dubbed “Souls the the Polls,” the get-out-the-vote effort on the second day of statewide early voting was sponsored by several churches, local NAACP chapters and several public service sororities and fraternities, including Delta Sigma Theta.

The march reflected the tradition of many black voters casting their ballots after church on the Sunday before Election Day.

This year, however, the eight-day period set aside for early voting — cut from 14 days in the last presidential election — does not include the Sunday before Nov. 6. Early voting ends Saturday.

Many Democrats charged that Republican Gov. Rick Scott and the Republican-controlled Florida Legislature scaled back on early voting for 2012 to suppress the minority vote. Republicans deny that charge.

But those marching Sunday said they did not want to take any chances.

The march and the rally outside the polls were nonpartisan. Both Democratic and Republican candidates were introduced before most marchers got in line to vote.

But there was little doubt which of the presidential nominees most of the marchers backed.

“Four more years,” the crowd chanted as the marchers streamed past Ray’s Meat Market, BG’s Home Cooking, under Interstate 95 and over the New River Bridge on a breezy, sunny day.

Not everyone marching was eligible to vote. Among the many youngsters joining family groups was Isaiah Blackwell, 15, a student at Northeast High School. Walking beside his grandmother, Blackwell said he could sense the historical precedents he had only read about.

“This makes me think of Martin Luther King, Jr. and the battle against segregation,” he said. “We have to vote to succeed as a country.”

Inside the library, Broward County supervisor of elections Brenda Snipes said at mid-afternoon that waiting time to get into one of the 50 voting booths ran from 20 to 60 minutes.

That wait time was down from Saturday, when Broward set a record for a single day of presidential early voting.

“We had 28,000 people vote Saturday,” said Snipes. “That is an exceptional number, shocking. I did not realize that people would turn out the way they did.”

By 4 p.m. Sunday, more than 19,000 had cast ballots in Broward County, according to county election officials.

The count of first-day early voters in Palm Beach County on Saturday was more than 13,200, according to elections office spokeswoman Erin Lewandowski.

Numbers from Sunday were unavailable.

This weekend, October 31 and November 1st, 2020, the Equal Ground Education Fund, which is the preeminent Black led non-partisan, non-profit working on building Black political power in Florida, is bringing their socially distanced “Souls to the Polls” statewide effort to fourteen counties to educate, empower, and turn out local Black voters in this key battleground state.   […]

National Urban League President Marc H. Morial has called for “a new civil rights movement,” one that will focus on economic empowerment and justice […]

By DAVID ROYSE  THE NEWS SERVICE OF FLORIDA THE CAPITAL, TALLAHASSEE, January 17, 2013….Gov. Rick Scott said Thursday that up to 14 days of early voting should be offered during the next election in Florida, […]