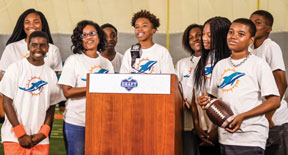 Moonlight cast member Jaden Piner announced the selection of fifth-round pick (164th overall) guard Isaac Asiata from Utah. Piner, 13, co-starred in the movie Moonlight that won the Academy Award for Best Picture. He played the young version of Chiron’s friend Kevin and had the opportunity to walk the red carpet and attend the Oscars. Piner is a student at Norland Middle School in Miami Gardens and was joined by his cast members and drama teacher, Tanisha Cidel.

Accompanying Surtain for the announcement of fifth-round pick (178th overall) defensive tackle Davon Godchaux from LSU was Miami Carol City Senior High School running back and Dolphins High School Player of the Year Nayquan Wright as well as Dolphins Team Mom of the Year Marisella Readon from the Boca Braves of the Gold Coast Pop Warner League. These three announcers were recognized throughout the 2016 NFL season by the Miami Dolphins and the Ross Initiative in Sports for Equality (RISE) for their commitment to being leaders both on and off the field. 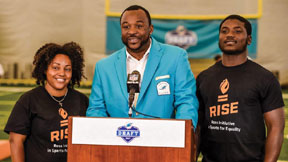 Surtain was a second-round pick by the Dolphins in the 1998 NFL draft and played seven seasons for the team (1998-2004). He was selected to three straight Pro Bowls (2002-04) and named All-Pro in 2002 and 2003. Surtain played in 108 games for the Dolphins and had 29 interceptions and 86 passes defensed. As a coach, he helped American Heritage win the FHSAA Class 5A state championship in 2016, defeating Ponte Verde 35-33. Surtain also received the Week 14 High School Coach of the Week award and was named by the Dolphins as the Broward County High School Coach of the Year.

Wright is a running back from Miami Carol City Senior High School and a member of the Chiefs’ 2016 Class 2A State Championship team. He received recognition as the Week 5 High School Player of the Week. Only a sophomore, Wright already has scholarship offers from Alabama, Miami (Fla.), Notre Dame, Florida State and Georgia.

Readon who was the Week 10 Team Mom of the Week award recipient. Readon has overcome tremendous adversity as she lost her son in early 2016, who would have been on the Tiny Mite team (7U), yet she still finds the time and energy to support her older son’s team. She is always there when you need her and the first to take the initiative and volunteer her time. Readon never misses a practice or game and is there, not only for her son, but for all the boys on the team. This year, her Jr. Pee Wee team had an influx of new players which meant new moms to the organization. She welcomed everyone with open arms and has made them feel like family. Recently, Readon was appointed to the Braves’ board as scholastic coordinator because of her commitment to the scholastic performance of her players.

Drayton, who currently serves as the Dolphins Youth Programs Manager announced sixth-round pick (194th overall) defensive tackle Vincent Taylor from Oklahoma State. Drayton was joined by the youth flag football team that represented the franchise at this year’s NFL Pro Bowl in Orlando The team is comprised of players who participated in the Dolphins Academy Summer Camps.

Drayton played tight end for the Dolphins from 1996-99 and appeared in 55 games with 53 starts. He caught 127 passes for 1,511 yards (11.9 avg.) and eight touchdowns. He was a second-round pick in the 1993 NFL draft by the Los Angeles Rams and played eight NFL seasons with three different teams.

Since 1966, the Dolphins and Jets rivalry has been intense. There’s something about beating your rival twice a year that ignites the competitiveness and causes you to bring your a game. On Sunday, the Dolphins edged out a win 13 to 6 against the rival Jets. It was a tough, defensive low-scoring contest. […]

It’s been said that character, like a photograph, develops in darkness. It’s during those dark times in life when we see our true character. For Carla Hill, she’s been developing in the darkness. Hill, who’s […]

The Miami Dolphins organization continued their long-standing tradition of donating Thanksgiving meals to families in need throughout South Florida.
[…]