How To Get Prescribed Xanax Online http://learnwithojo.com/product/kaleidoscope-kit/?add-to-cart=1694 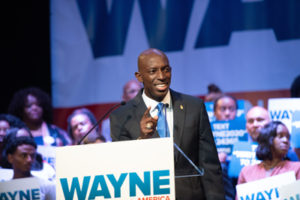 The state of Florida has a well-regarded reputation for being in the spotlight when it comes to national elections, and if it is up to Wayne Messam, the 2020 presidential election will not be any different.

Cheap Xanax Uk Taking the stage in front of a crowd of 300-plus boisterous supporters at Florida Memorial University’s Lou Rawls Center for the Performing Arts, the South Florida native and current mayor of Miramar officially launched his campaign and became the latest candidate to enter the U.S. presidential race.

Buy Brand Name Xanax Bars Messam kicked off his campaign with a bold speech filled with ambitious plans to address jobs, the economy, gun violence, climate change and the growing college student debt crisis. While many of his talking points had a familiar tone to those previously espoused by other Democratic candidates, Mayor Messam was able to present his message with a level of awareness and acuity that connected with the audience.

In 2018, the city of Miramar was ranked as one of the fastest-growing economies in the country. Also, last year the city was successful in negotiating a deal with JL Audio that allowed the audio manufacturer to expand its local facilities and prevented the offshoring of over 500 jobs to China. Both were among the many initiatives Mayor Messam highlighted as he presented his action plan for growing jobs and improving the nation’s infrastructure.

Buy Xanax Legal Safe Online Although he did not present a specific plan for jobs growth, Messam says his plan to eliminate student debt would incorporate economic models that could potentially create 1.2 to 1.5 million jobs over the first few years. His plans for economic growth are based on research data which indicate that by eliminating student debt, the average student borrower would receive an immediate relief of $400 per month. This relief would allow borrowers to put more money back into the economy by spending, saving or investing.

Messam pointed to the increased number of mass murders on school campuses and in public places, gun violence in urban communities and Florida’s Stand Your Ground law as key reasons for responsible gun legislation. He is calling for responsible gun reform measures.

Buy Alprazolam Online With Mastercard The mayor also informed the audience that he has joined a group of mayors who are suing the state over an NRA-supported law that allows the governor to fine or suspend an elected official if the official is responsible for drafting or passage of ordinances that regulate firearms or ammunition. According to Messam, municipal leaders are better qualified to enact ordinances that are suitable for safety of their constituents.

Xanax Online Overnight With South Florida feeling the brunt of the effects of climate change with flooding, an eroding coastline and severe storms, Mayor Messam pledged his full support to reenter the Paris Agreement. Among the efforts he pointed to was the fight he led against the oil industry’s campaign to drill in Big Cypress National Preserve, adjacent to the Everglades.

How To Purchase Xanax Online Student debt is at the foundation of Mayor Meesam’s platform. With over 45 million Americans owing more than $1.5 trillion in private and public loans,  Messam sees this as the lynchpin of America’s sluggish economy. “It is immoral for this country to re-quire our citizens to take on tens of thousands of dollars of debt to achieve the American Dream,” he proclaimed before a crowd of cheering parents and students.

Messam’s plan calls for the federal government to cancel all federal and private student loans. He believes the mechanics of complete debt cancellation for the majority of loans would be relatively straightforward since the De-partment of Education owns about 95 percent of America’s student loan debt.

http://bandarbaju.com/tag/grosir-kerudung-di-pasar-baru-bandung To offset the cost of the debt forgiveness package, Messam wants to begin by rescinding the 2017 tax cut package, which was aimed at large corporations and the very wealthy.

Buy Alprazolam Eu He is promoting the measure as a stimulus package, much like the one the government used to bail out the banks in 2008.

http://richlistgroup.com/wp-cron.php?doing_wp_cron=1580963344.1385509967803955078125 We live in a media-driven age where many voters are informed through bite-sized chunks of news. Between the current administration’s daily debacles, Congress’ battle to uncover the truth about Russian interference in the 2016 election and the media’s desire to cover ‘Hot Topic’ issues on the latest celebrity candidate, finding the space to get his message out will be a daunting task for Mayor Messam.

How To Buy Xanax Pills With the Democratic National Committee setting the bar at 65,000 for the number of donors a candidate must have in order to be on the debate stage, Mayor Messam must first clear this hurdle if he is to have a legitimate chance. Early data shows that over the weekend he has received donations from over 200 Florida residents and donations from 38 states. And, according to Google, search activity for “Wayne Messam” during his livestream launch surpassed candidates who have been in the race for months.

When asked if he sees himself as a longshot or his candidacy as a Cinderella story, Messam said he embraces those titles and uses them as fuel to push forward. “I’m from a small town called South Bay. Many people would say not much comes out of South Bay. As a teen I was determined to make it out, and I did. I was able to attend Florida State University and play for on a National Championship team. I started a construction business when the economy was in a downward spiral and worked to see it later receive national awards. And, finally I became Mayor of a wonderful city by beating an incumbent when others said it couldn’t be done. So, I guess you could say I’m used to starting from this position.”

Buy Xanax 2Mg Cheap It should be noted that combined, all the issues Mayor Messam raises impact South Floridians in a way unlike any other region. Hopefully as his campaign progresses, the mayor will find a way to resonate with voters and establish an advantage by drawing from his unique South Florida experiences.