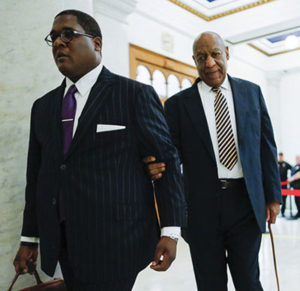 NORRISTOWN—Bill Cosby’s criminal retrial on sexual assault charges set to begin with jury selection on March 29 after Montgomery County, Pennsylvania Judge Steven O’Neill rejected the comedian’s request to have the charges against him dismissed.

Jackson told Cosby’s attorneys under oath in January that Constand confided that she could “set Bill Cosby up” and “extort him” by making false allegations.

Prosecutors continue to claim that Jackson’s testimony would be hearsay and therefore inadmissible.

O’Neill also denied a second dismissal motion from Cosby’s team that claimed that they had “irrefutable proof” that the sexual encounter between Cosby and Constand occurred prior to January 2004 and therefore, the statute of limitations had expired before the case was filed on December 30, 2015.

Under Pennsylvania law, prosecutors have up to 12 years to bring a criminal case after an alleged crime. Former Montgomery County District Attorney Bruce Castor had previously declined to bring charges instead urging Constand to file a civil suit.

Constand and Cosby reached an out of court settlement in 2006 for an undisclosed amount and now Cosby wants that agreement admitted as evidence.

His legal team believes that it will show that Constand’s allegations are motivated solely by money and that she and the comedian had a consensual relationship, one in which Cosby has admitted that he wasn’t interested in “sex per se’, but just petting and touching.”

During the recent hearings about the case, prosecutors also asked O’Neill to allow testimony in the upcoming trial from 19 women who said Cosby drugged and assaulted them. Some of the claims date back to 1965, prosecutors said.

“He did it 19 times, before he did it to Constand,” Assistant District Attorney Adrienne Jappe, who argued for two hours that the judge should allow the women as witnesses.

O’Neill said the new trial should last one month, or two weeks longer than the first trial. If he allows the 19 alleged victims, defense lawyers believe the trial will go past a month.

During pretrial hearings for the initial trial, which ended in a mistrial when jurors couldn’t reach a verdict, O’Neill declined prosecutors’ request to allow 13 accusers who, in recent years, have come forward with allegations similar to Constand’s claims.

In his previous ruling, O’Neill allowed just one accuser. He said at the time that an individual’s history could not be admissible evidence that proves he committed a certain crime.

During the recent hearings that took place on last week, lawyers for both sides went after each other with prosecutors asking the judge to remove Cosby’s defense attorneys, because they accused the state of malicious prosecution.

Before the hearings started, O’Neill expressed condolences to Cosby whose daughter, Ensa, died late last month from kidney failure at the age of 44.

“Thank you, your honor,” Cosby said as he rose and bowed to the judge.

Cosby spokesman Andrew Wyatt said Ensa had been “in bad shape” since last year. He said that her death came, as one of her sisters was cleared to donate a kidney.

“Mrs. Cosby was there day and night with Ensa, keeping watch,” Wyatt said. “She was there to the end and called and said she wasn’t going to make it. This family is tough.”

Wyatt said having a defense team led by Mesereau has afforded the Cosby family a bit of comfort.

Jury selection is scheduled to begin Thursday, March 29 while the trial is on the calendar for Monday, April 2.

This is why we march

It’s Time for NFL Players to Stand for Something

It’s Time for NFL Players to Stand for Something […]