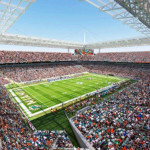 By JIM TURNER
THE NEWS SERVICE OF FLORIDA

THE CAPITAL, TALLAHASSEE, May 21, 2013 ……… Florida was shut out Tuesday by the National Football League and Major League Soccer.

The NFL awarded the 2016 Super Bowl to the San Francisco area and the 2017 championship contest to Houston, a little more than two weeks after a bill tied to potential state funding for the Miami Dolphins and an Orlando soccer stadium died in the Florida House.

Orlando City Soccer Club investor Flavio Augusto da Silva said, in a message on the team website, his team would begin an undetermined “plan B” to fund the new stadium, with the goal remaining to join the MLS by 2015.

“We feel confident that once we figure out the finances everything will fall into place,” the investor said.

For the Dolphins, the opportunity to host one of the upcoming Super Bowls was a goal while asking the Legislature to back a referendum that proposed an increase in the hotel bed tax and also to let the team apply for sales tax reimbursements, both in order to help pay for $350 million in improvements to Sun Life Stadium.

But with the upgrades in Miami Gardens now on hold, NFL owners meeting in Boston instead decided to hold the championship games in the $1.2 billion stadium being built by Santa Clara for the San Francisco 49ers and at Houston’s Reliant Stadium, which has a retractable roof and is installing a pair of taxpayer funded, $16 million, hi-def LED “super screens.”

Miami Dolphins owner Stephen Ross, a billionaire who has not advanced plans since the legislative defeat, had argued the Sun Life improvements — including a canopy to shield fans from the sun and rain — were needed to avoid a repeat of the 2007 Super Bowl in Miami that was played in heavy rain.

“Today’s decision doesn’t dampen our enthusiasm to pursue Super Bowls in the future, since we are steadfast in our belief that those games are good for the South Florida community,” Ross said in a release that also congratulated San Francisco and Houston.

Ross was less graceful May 3, when the Legislative session ended without any stadium funding proposal reaching the House floor.

Ross slammed House Speaker Will Weatherford, R-Wesley Chapel, for putting “politics before the people and the 4,000 jobs this project would have created for Miami-Dade, and that is just wrong.”

Weatherford on Tuesday said the stadium funding issue had “three strikes” against it: failure to get heard by the House Appropriations Committee; a lack of support from members of the Miami-Dade delegation; and 57 percent of the vote in Miami-Dade going against the sales-tax referendum.

“Even with the millions of dollars being spent, the referendum was going down,” Weatherford said on his campaign website on Tuesday. “The voters spoke…and so did the Legislature.”

The results of the referendum – early voting was halted when the session ended – were not released until May 14.

The Orlando City Soccer Club had counted on legislation to provide up to $30 million in state sales-tax subsidies to help build a $110 million, 18,800-seat stadium designed to entice the MLS to award Orlando the expansion franchise.

As part of that package, Orlando City SC was to put up $30 million, with $25 million in tourist taxes coming from Orange County and $25 million in land and cash from Orlando.

“It’s football, it’s not rocket science.” Head coach Adam Gase said those words at the conclusion of the Miami Dolphins veterans voluntary minicamp. Thankfully, like rockets, the Dolphins are starting to trend upward. If someone […]