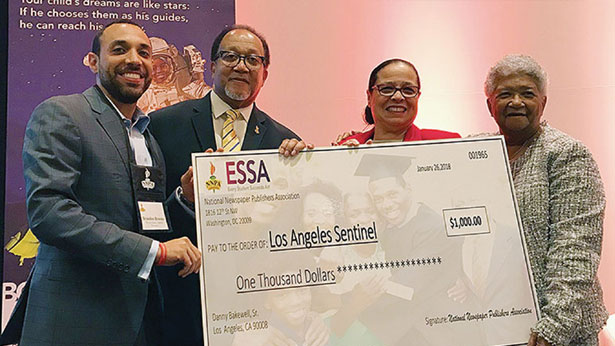 L to r: Brandon Brooks, the managing editor of the Los Angeles Sentinel; Dr. Benjamin F. Chavis, Jr., the president and CEO of the NNPA, Dr. Elizabeth Primas, the program manager of the NNPA ESSA awareness campaign; and Dorothy Leavell, the chairman of the NNPA, celebrate the Los Angeles Sentinel for the newspaper’s engagement with the NNPA ESSA awareness campaign during the 2018 NNPA Mid-Winter Conference in Las Vegas, Nevada. (Freddie Allen/AMG/NNPA)

Today, more than ever before, parents, educators and stakeholders around the country are learning about the Every Student Succeeds Act (ESSA) and the opportunities it presents for school districts to innovate learning in their classrooms and to address academic achievement gaps—through the pages and websites of the Black Press.

“It’s critical for [Black] parents to be involved and the Black Press is strategically embedded in our communities, so that we have more opportunities to get the word out about ESSA,” said Dr. Benjamin F. Chavis, Jr., the president and CEO of the National Newspaper Publishers Association (NNPA). “The NNPA is pleased to partner with and applauds the Bill and Melinda Gates Foundation for working to raise public awareness throughout the United States about equity in education.”

Chavis continued: “Bridging the academic gap in education, in particular for African American students and others from disadvantaged communities, is of critical importance.”

The Bill and Melinda Gates Foundation partnered with the National Newspaper Publishers Association to create a three-year, multi-media public awareness campaign focusing on the unique opportunities and challenges of the Every Student Succeeds Act (ESSA).

Dr. Elizabeth V. Primas, the project manager for the NNPA ESSA awareness campaign and a life-long educator, said that ESSA was established to help increase the effectiveness of public education in every state.

ESSA, which reauthorizes the Elementary and Secondary School Act (ESEA) and replaces the No Child Left Behind Act, received bipartisan support and was signed into law by President Obama on December 10, 2015.

Under ESSA, states have more flexibility to craft elementary and secondary education programs designed to improve educational outcomes in the nation’s public schools. The law also ensures that every child, regardless of race, income, background, or where they live, has the opportunity to obtain a high-quality education.

“Education is the pathway out of poverty,” Primas said.

Since receiving the Gates Foundation grant, the NNPA has engaged its 211-member publications in more than 60 markets across the country in a campaign designed to heighten public awareness about ESSA, and to focus on efforts and policies aimed at closing the achievement gaps for students of color and low-income students.

Due to the importance of education in the Black community, NNPA members have paid particular attention on the NNPA ESSA awareness campaign; three NNPA members were rewarded for that engagement at the Mid-Winter Conference for their relentless reporting on ESSA.

“I do believe that the last chance anybody has to hold anybody down is education,” said Bobby Henry, the publisher of the Westside Gazette in Fort Lauderdale, Florida, who was one of those publishers that received an award for his engagement with the awareness campaign.   “The state of Florida is not doing too well in educating our children, so I thought it was out of duty and respect that we do our due diligence to bring awareness to our readers.”

Henry added that the ESSA law and reporting on it helps to hold school districts accountable and he said that it’s also important that more teachers of color are recruited and hired.

Brandon Brooks, the managing editor of the Los Angeles Sentinel, said that education is the key to helping to end poverty in the Black community and all NNPA members are a testament to that.

Danny Bakewell, the publisher of the Los Angeles Sentinel was also rewarded for his newspaper’s engagement with the NNPA ESSA awareness campaign, and Brooks accepted the reward on behalf of the Sentinel.

For numerous reasons, Brooks said he didn’t hesitate to run articles about ESSA and educational equality in the Los Angeles Sentinel—in print and online.

“The content [produced by NNPA Newswire] was there and it was rich and educational and informative. Running the articles has never been too much of a directive, especially when I got the green light,” Brooks said.

Brooks continued: “The goal of the Black Press has always been to advocate for justice for Black people. ESSA is a campaign for social justice and equality in education. It’s our duty to reach out to our students, our kids and to make sure that they have the information to succeed. If I didn’t do that, I wouldn’t be doing my job.

Freddie Allen, the Editor-In-Chief of the NNPA Newswire, called NNPA publishers “MVPs” of the NNPA team for their work in publishing stories about ESSA.

Another case of Alzheimer’s

The implications of the increase in Alzheimer’s patients goes far beyond the personal loss and sadness experienced by families. We are talking about immense healthcare costs. As I have witnessed in my extended family, an individual who is otherwise healthy can suffer a long and slow decline that can be not only emotionally intolerable for all involved but immensely expensive, sometimes to the point of personal bankruptcy. […]

“Her daily joy was not simply cooking but preparing meals to bring people together. One of her most prized contributions was advocating for the Civil Rights Movement through feeding those on the front lines of the struggle for human dignity,” Chase’s family said in a statement announcing her death. (Photo: Wikimedia Commons / Blake Nelson Boyd, [GFDL (http://www.gnu.org/copyleft/fdl.html)] […]