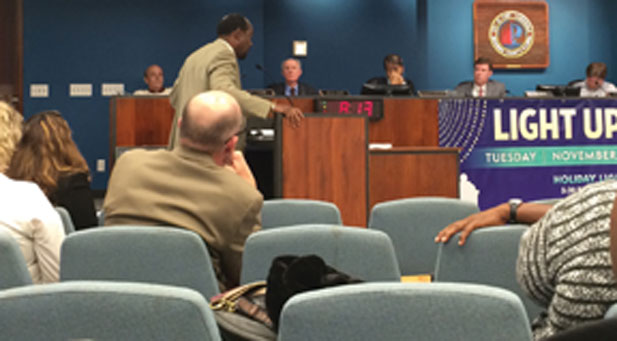 William Cone, Jr., whose family owns Cone’s Plaza on historic Sistrunk Blvd, expressed his agreement before the City’s Zoning Board along with many other area residents and business owners with the City’s staff for the proposed development restrictions for the area.

FORT LAUDERDALE, FLA – The City of Fort Lauderdale’s Planning and Zoning Board approved the zoning amendment changes for the Northwest Regional Activity Center (NWRAC), Nov. 19, 2014 during its regular meeting.

Many proponents of the amendment were in attendance and spoke on behalf of the changes. The community realized the need for change in order for positive economic development to occur while maintaining a sense of place and neighborhood.

The plans referenced above, envision a vibrant community, with a successful mix of business and residential uses defined with walkable streets and quality buildings through the creation of guidelines that would enhance the pedestrian realm and give clear intent for an active street level and an exceptional public realm experience.

As part of the implementation process to date, the City has taken action to address some of the issues of concern for the area. Through the CRA, the City has established programs for improvements to certain existing sites.

In 2013, the City revised the ULDR to prohibit new liquor and convenience stores within the Northwest Regional Activity Center (“NWRAC”) land use, based on crime statistics that indicated these uses have had a negative impact on the area. In addition, the Fort Lauderdale Housing Authority has recently completed several quality projects in the general area furthering goals of livability, sustainability and sense of community, with additional projects planned in the future.

The new zoning districts will establish the basis for appropriate uses that will enhance development and redevelopment efforts in the study area, as well as require development sites to meet specific design standards, through implementation of design standards intended to promote an active urban area, while allowing flexibility and creative design solutions to meet the intent of the ordinance, as has been successfully realized with development projects subject to the Downtown Master Plan area, as well as the South Andrews Avenue Master Plan.

Members of the board com-mended city staff for incorporating community concerns in the amendments as well as the fact that the amendment takes in to consideration the small developer.   The board appeared satisfied with the proposed amendment changes and asked that permitted uses be reviewed as the area evolves.

The amendments are slated to go before the City Commission sometime in December, 2014.