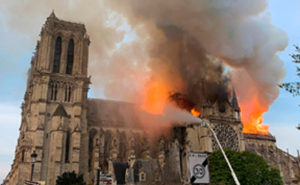 Laurent Nuñez praised the “courage and determination” of firefighters who “risked their own lives” to salvage the building’s stone structure and its two towers.

The fire ravaged the 850-year-old cathedral’s roof and caused its spire to collapse.

The cause of the blaze is unclear.

“We now know it all came down to 15-30 minutes,” Mr. Nuñez said, adding that police and fire services would spend the next 48 hours assessing the security and safety of the structure.

Paris public prosecutor Rémy Heitz said his office was “favouring the theory of an accident”, but had assigned 50 people to investigate the origin of the fire.

Other officials have suggested it could be linked to extensive renovation works taking place at the cathedral.

Thoughts are now turning to how Notre-Dame will be rebuilt, which restoration experts say could take between 10 and 15 years.

A number of companies and business tycoons have so far pledged funds between them to help with reconstruction efforts, Le Monde newspaper reports.

Offers of help have also poured in from around the globe, with European Council President Donald Tusk calling on EU member states to rally round.

The blaze was discovered at 18:43 local time (16:43 GMT) on Monday, and firefighters were called. The flames quickly reached the roof of the cathedral, destroying the wooden interior before toppling the spire.

Fears grew that the cathedral’s famous towers would also be destroyed.

But while a number of fires did begin in the towers, Mr Nuñez said they were successfully stopped before they could spread.

By the early hours of Tuesday, the fire was declared under control, with the Paris fire service saying it was fully extinguished by 10:00 local time (08:00 GMT).

What is the damage?

Search teams had already begun assessing the extent of the damage when dawn broke over the French capital.

The cathedral’s blackened stone and charred scaffolding were revealed to onlookers for the first time.

Photos appear to show that at least one of the cathedral’s famed rose windows has survived, although there are concerns for some of the other stained-glass windows.

Christophe Castaner, France’s interior minister, warned that while the principal structure had been saved, the building was still unstable.

“We will be standing at [Notre Dame’s] bedside”, he added.

Mr Nuñez said that “overall”, the structure was in good condition, but that “some vulnerabilities” had been identified in the stone vaults and the remainder of the building’s ceiling.

Experts have not yet been allowed on site to assess the damage and French firefighters have sent a drone to survey the scale of the destruction.

Heat and water damage will also need to be assessed.

The cathedral’s 18th Century organ has not been burned, but it is not clear whether it has been damaged by water, Bertrand de Feydeau, from the French charity Fondation du Patrimoine, told Associated Press.

Individuals and groups are mobilising to help rebuild Notre-Dame. Hundreds of millions of euros have already been pledged.

Air France said in a statement that the company would offer free flights to anyone involved in the reconstruction.

Another €200m was pledged by Bernard Arnault’s family and their company LVMH – a business empire which includes Louis Vuitton and Sephora – on Tuesday morning, according to Reuters.

French cosmetics giant L’Oreal and its founding Bettencourt family have promised to give a further €200m. Total, the French oil giant, has pledged €100m.

Fondation du Patrimoine is launching an international appeal for funds for the cathedral, a Unesco World Heritage site.

Russian President Vladimir Putin said he was happy to send experts to help restore the cathedral.

The British government is also looking into what it can do to help, according to Ed Llewellyn, the UK ambassador to France.

What about the cathedral’s treasures?

Emergency teams managed to rescue valuable artwork and religious items, including what is said to be the crown of thorns worn by Jesus before his crucifixion.