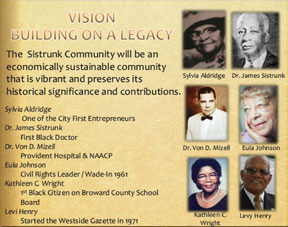 In the early 1970s, the great educator and historian, Dr. Chancellor Williams, released Destruction of Black Civilization: Great Issues of a Race from 4500 B.C. to 2000 A.D. a dynamic and in depth study of mighty African civilizations and their subsequent ruin. Throughout the text, Dr. Williams identified two reasons for the demise of these civilizations: inner-tribal disagreements and the introduction of (mostly non-Black) outsiders to tribal territory. The book was to serve as a cautionary tale, for what Dr. Williams presented was the process of gentrification in its ancient form. The text demonstrated what happens when inner differences take center stage while external forces quietly close in.

Like NYC’s Harlem, Chicago’s Bronzeville, and count-less other rich and historic Black neighborhoods, real estate developers and investors have set their eyes on the Sistrunk Community. That is reality.

Despite previously falling in-to what the City of Fort Lauderdale’s Community Development Agency describes as “slum and blight”, suddenly the Sistrunk Corridor deserves revitalization and the community’s close proximity to a rapidly expanding and increasingly glitzy downtown emphasizes this urgency. Plans and designs have been drafted – all without com-munity input or consideration.

“You can’t call everybody.” Stated Lorraine Mizell, a descendent of Von D. Mizell and a Sistrunk business owner. She has become a leading voice and supporter of relocating the L.A. Lee Family YMCA two blocks north. Like others she has emphasized the benefits the new YMCA will bring to Sistrunk Blvd.

“Sistrunk needs a shot in the arm,” Mizell emphasized, “We need revitalization.” She believes the new YMCA will do just that.

Again, the disrepair and neglect of the Sistrunk Corridor is obvious and it is undeniable that the community is in desperate need of investment and renewal. The question is who will lead that cause, the community or the city? This is the primary concern of those fighting to preserve the Mizell Center.

“It seems there has been backdoor conversations taking place. Selective likeminded people does not constitute a cross-section of the community,” stated Bobby R. Henry, Sr., Publisher of the Westside Gazette and proponent of the small business incubator plan. Mizell dismisses that claim. As a longtime member of the L.A. Lee Family YMCA, she contests any suggestion that these plans have been years in the making.

“The idea to move the YMCA was just a thought in passing conversation,” she emphasized, “Thoughts had to come first. It wasn’t intentional.”

What does seem intentional was the seemingly deliberate attempt to keep the community’s input out of the discussion. This was demonstrated at last week’s City of Fort Lauderdale Commissioners Meeting when nearly 20 representatives from the community attended wearing “Preserve Our History, #SistrunkStrong” black and white t-shirts, expecting to bring to the Commissioners’ attention their opposition to the relocation of the YMCA. However, before the meeting, the item was pulled from the agenda.

In response, Asa Roberts Shaw, a community activist with leadership in the Black Lives Matter Alliance of Broward, volunteered to attach the community’s concern to another agenda item and address the Commissioners. Audience members claim the City of Fort Lauderdale’s District III Commissioner, Robert L. McKinzie, had an indifferent response, turning away from Shaw while he was speaking, becoming pre-occupied with his cell phone, grimacing, and “giving disrespectful looks”.

“Whenever someone from the community speaks, they are dismissive,” Shaw explained, “I am used to it.”

If true, that is alarming, but regarding Commissioner McKinzie, a man described as “an advocate for community engagement” on the City of Fort Lauderdale’s website, it is confusing behavior.

Supporters of preserving the Mizell Center will attend the next Commissioner’s meeting on April 4 and will hold a rally prior to the meeting. They are expecting a large turnout.

Still, there are questions on the self-sustainability of a re-purposed Mizell Center. The inability to generate revenue, resulting in dependence on a neglectful City, was a large factor in the center’s former decline. Some point to other buildings along Sistrunk Blvd built with the intent to house small businesses, but are either left standing empty or lack stability.

“Making the center a small business incubator is a long shot,” explained Mizell, “There will be a couple people in and out of there, but it will not sustain itself. The YMCA is a sure shot and it will pay for itself.”

The fact remains: community input was not thoroughly sought prior to the conversation, which has resulted in the fate of the center to lean in favor of the YMCA’s plans. This has caused heated debate within the community on the best route moving forward.

Could an ‘F’ from NRA rating be the cause of gun violence in Florida?

Could an ‘F’ from NRA rating be the cause of gun violence in Florida?
[…]

Dr. Bernice A. King brings more than five generations together
[…]