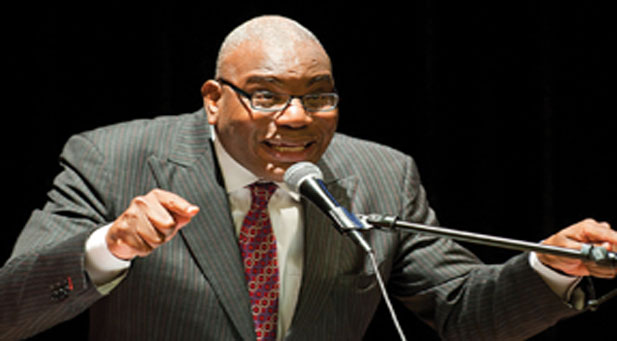 The Rev. Dr. R.B. Holmes began pastoring in 1976 at the Timothy Baptist Church in Jacksonville, Fla. where he served for 10 years before spending the next 27 years as the spiritual leader at the Bethel Missionary Baptist Church in Tallahassee, Fla.  Rev. Holmes has announced his candidacy to become the next president of the National Baptist Convention, USA, Inc., the oldest and largest religious organization in the world.

Rev. Holmes brings a plethora of experience in a vast array of leadership positions including religious, civic, educational, and business organizations. Throughout his professional career, Rev. Holmes has built an impressive resume of community service and a diverse background, all of which he hopes will catapult him into such a prominent role in the Baptist Church community. With a current congregation at Bethel Missionary Baptist Church estimated at 5,000 members Rev. Holmes heads up one of Florida’s largest pre-dominantly African American churches.

Some of Rev. Holmes’ most noted accomplishments read like a Who’s Who Among Florida Leaders. He has either served or is presently in an official capacity in a number of high profile positions:

* President and founder of the National Save the Family Now Movement, Inc.

· Member, Board of Trustees for three Historically Black Colleges and Universities

Should he be elected to the post as president of the National Baptist Convention, USA, Inc., it would place him on a short list among the nation’s most powerful and influential religious leaders.

Rev. Holmes has outlined a very ambitious platform which he calls his “12 Point Action Vision Plan” in an effort to elevate the organization to address the issues and meet the demands of our society in the 21st Century.

Reverend Holmes recently shared some of his insights about himself, his career, and thoughts on the issues he felt should be addressed which impact society in general and the African American community specifically in an interview with the Westside Gazette Newspaper.

1. Why, when and how did you decide to become a minister?

I was called into to the ministry in the early 70’s. I always had a deep concern to help people who were struggling emotionally, spiritually, financially, and socially. I believe that the spirit of God moved upon my heart as a teenager when I started the first community organization in my neighborhood “CRIB” which stood for “Community Relations In Blackness!” At an early age, I knew the Lord was calling me into the ministry. After accepting “the call” in 1970, it was clear to me that I needed to prepare myself academically, emotionally, theologically, and psycho-logically.

2.  What has been the single greatest challenge that you’ve faced in ministry?

It’s a challenge to maintain a high degree of integrity and motivation. The integrity or character piece is so important because if people cannot believe what the preacher says because of a negative behavior, then it destroys the credibility of the minister and the message.  As it relates to motivation and dealing with people, the minister has to consistently and practically encourage himself in the Lord and know that it is really about God’s will for His people and not one’s self will. There-fore, in order to maintain a strong sense of motivation, for me, it has been through prayer, preparation and being purpose- driven.

3. What is the single most important role that a minister plays as a pastor?

I think that perhaps one of the most significant roles, especially for African American pastors is to find a creative way to keep the membership energized and excited about how ministry can transform individuals and communities.

4. What has been your proudest moment in ministry?

It has been a tremendous blessing seeing members develop strong Christian virtues and values while concomitantly giving back to the community in areas of tithes, time, gifts, and testimonies.

5. What should the role of the church be regarding serving the needs of both members and the community?

I believe the gospel of Jesus as recorded in St. Luke 4:18 is my theme scripture as it relates to community empowerment, encouragement, education, evangelism, mission, social justice, and economic development. (The Spirit of the Lord is upon me, because he hath anointed me to preach the gospel to the poor; he hath sent me to heal the brokenhearted, to preach deliverance to the captives, and recovering of sight to the blind, to set at liberty them that are bruised. St. Luke 4:18)

6. Should the Black Church be active in the socio-economic as well as political issues which face its congregation?

I think it is incumbent upon the Black church to be engaged in the life of the congregation and the community.  Jesus made it clear that we are the light of the world and the salt of the Earth (St. Matthew 5:16-18).  Therefore, the Black church historically has always been a place that we can look to for divine guidance, comfort, liberation, sanity, security and direction.

7. Why did you decide to run for office?

After giving great prayer, meditation, and evaluation of the state of Black America and the challenges of the Black church, I sensed an urgent need for the Black church to be re-energized as the main source and resource for the strengthening, saving and sustaining of the Black churches, Black family businesses, Black colleges and universities, and the Black race.   As you know, the National Baptist Convention, USA, Inc. is the oldest and largest religious institution in the world. It has to become more vibrant, visible, and viable to meet the needs of our people in the 21st century. This is why I have a “12 Point Action Vision Plan” that will literally move the National Baptist Convention, USA, Inc. into the 21st century to transform churches and communities. I believe my pastoral involvement over the last thirty-seven years has adequately prepared me to use the gifts, experiences and skills to design models of ministries for the up-building of the Black church and community.

8. What can be expected from you should you be elected?

If I am fortunate to be elected to president of the National Baptist Convention, USA, Inc., you will see a convention that will operate its own television and radio stations.

You will see a convention that will develop its own financial institutions.

You will see a convention that will address both the physiological and psychological health disparities in our communities.

You will see a convention that will embrace, nurture, involve and celebrate its young pastors and young people.

You will see a convention that will become more relevant, responsive, and rigorous.

On a personal note Reverend Holmes is the son of the late Deacon and Mrs. R.B. (Lucille Johnson) Holmes, Sr. He resides in Tallahassee, Fl. with his wife Dr. Gloria Price Holmes. They have three children and three grandchildren.

Celebrating six years of dedication and commitment to the people of God. […]