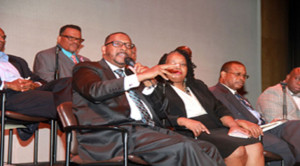 By Janey Tate and Carolyn Guniss

For the first time, all of the top Black-owned media companies in South Florida have joined forces to show a united front and to prove to advertisers that doing business with them is more than worth it.

The group members, nine media organizations, named themselves the Black Owned Media Alliance (BOMA) and put on their first symposium as a way to educate media buyers and advertisers. It was the first in a series of planned educational outreach in an attempt to get the respect shown to even smaller media companies that are non-Black.

During a media symposium, Dexter Bridgeman, owner and creator of Legacy and MIA magazines, said the group’s first approach would be informative, to let advertisers know their influence in the Black community. BOMA is the brainchild of Bridgeman, who in the summer invited several Black media owners to join with him in reaching out to the advertising community.

But while Bridgeman sees the group as an educational and advocacy force, there was a lot of talk during the symposium of boycotting businesses that are heavily fraternized by Blacks but do not show their support through advertising.

Reference was made to Montgomery Bus Boycott in 1956 that lasted almost a year and the tourism boycott also known as the “Quiet Riot” in Miami 25 years ago, which lasted for two years. Both boycotts were effective and produced change.

After the symposium, Bridgeman said the educational campaign needs to continue and grow but the  group will not leave the b-word (boycott) off of the table if they are ignored.

“We want to make sure we have demographic information and statistical information to back up anything that we are saying,” said Bridgeman during the two- and half-hour long panel discussion.

During the symposium, held at Florida Memorial University on Oct. 22, a panel of 10 media professionals and owners spoke of their plights of being in business, the future of working together and what the community could do to support their efforts. Jessica Garrett Modkins of hip-rockstar moderated.

Among the panelists were, Pastor and WMBM 1490 AM radio host, Bishop Victor Curry, as well as representatives from newspapers Caribbean Today, The Miami Times and The Westside Gazette; magazines The Gospel Truth and Legacy and MIA; and online publications South Florida Caribbean News and Lesesne

Curry said he thinks boy-cotting should be considered in the realm of possibilities for the South Florida Black community to bring about change.

“Having forums like this, that’s fine, but if there is no change, they go right back and it’s the same old thing and all we did was have a feel-good meeting.” Curry said.  “It’s no change and dollars from the Black community are going back into those same places. They don’t feel a need to address these issues or advertise with African Americans or people of African descent.”

Curry gave an example of a time years ago when he shared with his listeners an incident he had at the furniture store, El Dorado. He said he had been severely disrespected by people who worked there. He said he didn’t bash the company, but asked if anyone else had a similar experience and to his surprise many in the Black community could relate. He said the company begged him to shut up and even offered a $500 incentive for him to do so.

“I didn’t want their money. I didn’t take it. I was there to spend money,” he said. Curry went on to say “I’m at a point in my life where I’m tired of spending money with people who don’t at least try to show some type of reciprocal relationship.”

“I suggest that we leave the b-word (boycott) on the table,” said Curry.

Eric Knowles, president of the Miami-Dade Chamber of Commerce, gave stats on how advertisers spend their money. He stated that only 3 percent or $2.24 billion out of $75 billions spent on television, magazines, newspapers and radio advertising was spent on media focused specifically on Black audiences.

Knowles said one reason they don’t care about us is be-cause we’re going to spend our money in their businesses anyway.

“That’s one thing integration took from us, is being able to stand on our own and being able to support one another. Is there a need for boy-cott? Perhaps,” he said. “But there’s a need for us to understand that when I drive by Sawgrass Mills and I see a sign that’s only in Spanish selling condos, that means that we’re not invited.”

Edwin O’Dell, corporate director for communications and partnerships at Jackson Health Systems, said since he’s started at Jackson, he’s made a conscious effort to make sure the hospital advertises with Black-owned media because it’s the right thing to do.

“Jackson does provide advertising dollars in the Black community,” O’Dell said. “The fact of the matter is it’s so important because we’re in the African American and Carib-bean community. We want them to know that we’re still here for you.”

The GOP and identity politics in the Black community

The Republican Party continues to miss the mark when it comes to engaging the Black community.