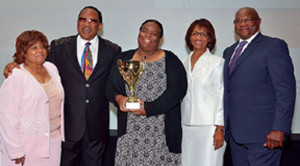 From l-r: Rosetta Perry, publisher of the Tennessee Tribune; Dr. Bobby Jones, Kenya Vaughn of the St. Louis American, Jackie Hampton, publisher of the Mississippi Link and Al McFarlane, publisher of Insight News pose for a photograph after Donald Suggs (not pictured) won “Publisher of the Year” at the 2016 NNPA Annual Convention in Houston, Tex. (Freddie Allen/NNPA)

The American, which routinely has earned recognition throughout the industry, received the John B. Russwurm and John A. Sengstacke Trophy for General Excellence and the 2016 Samuel E. Cornish Award for Publisher of the Year.

Just prior to the awards presentation, NNPA Chair and Washington Informer Publisher Denise Rolark Barnes said everyone was a winner.

“This is the highlight of the year for publishers where we can show off our stuff,” said Rolark Barnes, whose newspaper took home second place honors for the Robert L. Vann Best Layout and Design Tabloid and second place for the Don King Best Sports Section award.

NNPA Foundation Chair Al McFarlane, who is also the editor and chief of Insight News in Minneapolis, took a moment to reflect on his city’s favorite son, the late icon Prince.

McFarlane made a connection between one of the singer’s songs and the importance of the Black Press.

“Prince meant so much to Minneapolis. Young, gifted, Black and beautiful and that’s what we are here to celebrate,” he said. “The quality and capacity [that we have] to generate real time information to our community…while mainstream has seen circulations drop, we’re in the midst of new vitality.”

Merit Awards sponsor Miller-Coors sent its representative Steve Canal to the event and he too gushed over the importance of the Black Press. “I understand what you do and I’m laying the foundation for whoever comes after me to understand,” Canal said.

Eric E. Peterson, the vice president of Dealer Relations for NNPA sponsor General Motors, and Mark Rainey, the automaker’s director of Dealer Development, also each touted the success of the Black Press.

“General Motors and Chevrolet are pleased to be partners with the NNPA and we have a passion about what you do,” Peterson told the crowd gathered at the awards ceremony.

Rainey said he’s pleased with General Motors’ commitment to diversity and is impressed with the aggressive goals ahead.

“I’m confident we will increase diversity in minority dealers in our network,” Rainey said.

Meshach Sullivan was awarded a Texas Southern University student was on hand to receive one of 21 cash scholarships worth $1,000 from the NNPA Foundation and sponsors Ford and General Motors.

“As a cornerstone of Black culture and community, the Black Press continues to shine bright,” McFarlane said. “Illuminating the grand history and glorious future of our people. As a vital sector in the American media landscape, our newspapers demonstrate that the Black Press of America is the undisputed and indispensable master of engagement that binds our people to our destiny.”

“When there’s more of us in the room fighting for our stories to be told, and raising awareness about the issues impacting our communities, we have an even better chance of creating change and ending the practices that unfairly hold us back,” said Color of Change in a statement released on Twitter. […]