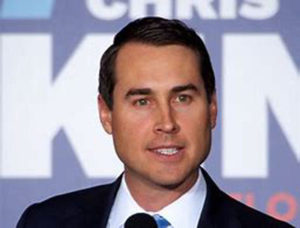 “I’m deeply troubled by Ron DeSantis’ attendance at these offensive conferences. Ron DeSantis has serious questions to answer to Floridians about why he repeatedly chose to attend these events. Rep. DeSantis has begun this campaign with a very divisive tone while the Gillum-King ticket believes in an inclusive Florida.”

“By attending these conferences, Congressman DeSantis gave credence to fringe leaders who peddle in discrimination. Now it’s time for the Congressman to come clean about his involvement with this group.”

The David Horowitz Freedom Center, established by right-wing provocateur David Horowitz, picked up the $1,218 tab for the three-term congressman’s two-night stay at a luxury beachfront hotel in Palm Beach last November, according to financial disclosure forms. DeSantis, a Palm Coast Republican, was invited to speak on national security issues.

Horowitz has emerged as an influential conservative political figure and has publicly shared controversial views on race and immigration, once lamenting the national “melodrama of Black victimization and white oppression.”

“If Blacks are oppressed in America, why isn’t there a Black exodus?” Horowitz wrote in a 1999 Salon article.

Rep. Ron DeSantis (R-Fla.), a gubernatorial nominee who recently was accused of using racially tinged language, spoke four times at conferences organized by a conservative activist who has said that African Americans owe their freedom to white people and that the country’s “only serious race war” is against whites.