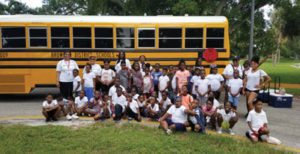 There is an old adage which goes,” the proof is in the pudding.” And based upon the improvements across the board, in academic achievement at Sunland Park Academy in Fort Lauderdale, the pudding has all the right ingredients for success.

Thanks to the efforts of the school’s faculty, parental involvement, and ongoing partnership with Community Based Connections, Inc.; the school has shown tremendous progress over the past several years. During the 2014-15 school- years Sunland Park Academy languished at the bottom of the pile as an F school, listing it among Broward County’s worst performing public schools.

Enter in the Community Based Connections, Inc. Early Achievers program and the school began to dig itself out of an academic hole. Today Sunland Park Academy stands close to the top of the heap as a B school. School principal Sharonda Bailey has bright hopes for the future.

“The Sunland Park Academy Early Achievers program has been an invaluable important asset for the students, staff, and community of Sunland Park Academy for several years. The partnership established between Community Based Connections, Inc., and the United Way of Broward County has provided our school with seamless service of academic remediation and enrichment for students in grades 1-3 as well as providing support for families,” said Bailey.

School administrators credit Community Based Connection, Inc., with fostering a greater connection with the community and encouraging parent participation. In addition, Community Based Connection, Inc. provides hands on academic support for students which target their special needs in a classroom environment. School faculty also attributes the program with boosting the self-esteem among students who have participated in the program.

Parents have also witnessed the benefits that their children have experienced as result of participating in the program.

“    It has aided in reinforcing the learning traits and development expected of my child, that are required,” said Maxine Brivitte.

Kathleen Cannon, President/CEO United Way of Broward County placed her stamp of approval on the Community Based Connection, Inc., and the impact it has had at Sunland Park Academy; reiterating the sentiment of parents and community representatives alike.

“A program like Early Achievers not only provides a creative and fun academic approach but allows our children the ability to beat the odds so they can feel prepared as they progress in school. Building a strong academic foundation is imperative for our children’s future and United Way of Broward County is proud to fund a program that addresses the challenges our students are facing,” said Kathleen Cannon, President/CEO United Way of Broward County,” said Cannon.

Brian Johnson, Vice-Mayor of the City of West Park who helped established the Community Based Connections, Inc. explained the origins of the organization.

“Before we established the organization we consulted with community leaders to determine if they felt there was a need for such an organization to fill a need and insure that we were not duplicating services which were already being provided,” said Johnson.

Mikelange Olbel is the current Executive Director of Community Based Connection, Inc. recently sat down with the Westside Gazette Newspaper to share some insight into the organization.

Brian Johnson, Vice-Mayor of the City of West Park who helped established the Community Based Connections, Inc. explained the origins of the organization.

“ Before we established the organization we consulted with community leaders to determine if they felt there was a need for such an organization in order to fill a need and insure that we were not duplicating services which were already being provided,” said Johnson.

Mikelange Olbel is the current Executive Director of Community Based Connection, Inc. recently sat down with the Westside Gazette Newspaper to share some insight into the organization.

(Westside Gazette) What led to the creation of your organization?

“Community Based Connections, Inc. (CBCI) was founded in 2009 by Brian C. Johnson on the belief that service providers who have natural ties to the communities they serve are in the best position to help those persons to adopt long term solutions to their own problems. Over the years, our organization’s leadership was either raised in, currently lives in, and/or spent substantial social/community service time in the communities we serve. Therefore, we are in a unique position to build and maintain community connections that support positive youth development.”

(W.G.)  As a community- based organization what are some of the challenges you’ve faced?

“I believe what is perceived to be the biggest challenge is the false belief that students and parent do not desire help. The reality is the students and parents want to be successful; however, they just want to know that people really do care about them. Students like parents don’t believe you care until you show them with action. That’s why we strive to show our organizational heart with action.”

(W.G.)  What would you consider the most important issues within our educational system, particularly pertaining to minority students?

“Even though there are many positive outcomes associated with parent and community engagement, educators still struggle with how to involve parents in the issues affecting public schools, especially parents from culturally and linguistically diverse communities. Less parent involvement is also likely in lower income neighborhoods and in areas where parents have little formal education or speak a language other than English. For teachers and principals in these communities, parent and community engagement becomes a source of frustration, even disappointment. Involving “hard-to-reach” parents and community members requires strengthening ties to community leaders, following through on commitments, developing trust and building relationships. It requires a firmer grasp of the cultural and language barriers that may sidetrack educators’ good efforts, and building this cultural awareness into your efforts to engage parents and community members.”

(W.G.)  What are some of the initiatives your organization has planned for the future?

“We are looking forward to our first community award banquet. We have our very first fundraiser coming up as an organization. Know Your Rights forum: Why Policies Matters”

(W.G.) Why is it so important for parents to play an active role in their child’s academic development?

“At Community Based Connections, Inc. we believe family engagement in schools improves student success, decreases absenteeism, and restores parents’ confidence in their children’s education. Furthermore, we believe that students with involved parents or other caregivers earn higher grades and test scores, have better social skills, and show improved behavior. In the article The Role of Parents in Early Childhood Learning by Susan H. Landry, PhD she said “Children’s development of the cognitive and social skills needed for later success in school may be best supported by a parenting style known as responsive parenting. Responsiveness is an aspect of supportive parenting described across different theories and research frameworks (e.g. attachment, socio-cultural) as playing an important role in providing a strong foundation for children to develop optimally.” The one of many reasons why we are grateful for our partnership with United Way of Broward County concerning the Early Achievers Program at Sunland Park Academy is because they understand the importance of parent’s engagements and they see the strong needs in the 33311 community.”

(W.G.)  How does community involvement impact the success of a school particularly when it comes to communities of color?

“The jobs of educators and administrators have grown more complex and more challenging. It used to be that knowing about curriculum, student learning or assessments met the grade. Consequently, we see increases of educators are encouraged to become experts in parent and community engagement, especially as public schools come under more public scrutiny than ever before. Schools across the country are growing more racially and ethnically diverse. Changing demographics require educators to not just think more critically about how to engage culturally and linguistically diverse communities in the decisions affecting public schools, but act on it.”

“Engaging these important communities is critical to improving public education. School improvement efforts have more staying power when parents and community members understand them. Failing to involve all community members in decisions affecting public education often results in apathy, distrust or confrontation. Prime example is when it was identifying that Sunland was seriously struggling from a performance stand point we Community Based Connections responded to a Request for Proposal by United Way. This allow us to hire teachers and teacher aids for after-school program to help focus on ineffective early learning experiences for Pre-schoolers, academic underachievement at the early grade levels and passive risk factors for families in the community. In addition, we provide academic enrichment and family support. But this happen because United Way of Broward County and Community Based Connections are involved with our Schools and Community needs.”