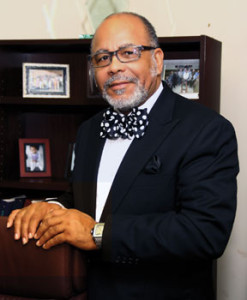 The Florida Morticians Association has chosen Richard A. Kurtz as Mortician of the Year, 2016

Richard A. Kurtz’s career in funeral service began 44 years ago at the Roy Mizell Funeral Home. Currently, the Roy Mizell and Kurtz Funeral Home is the oldest full service funeral home in our community, having been established in 1948. He provides individualized services designed to meet the unique needs of each family, with the highest standards of professionalism, compassion, dignity and integrity.

From adolescence to young adulthood, the desire to become a viable force in his community through service to others was a dream deeply rooted. Thus, his journey began. As a teenager, he secured employment at the funeral home. Later he advanced to embalmer to funeral director to managing funeral director and partner.

He graduated as a proud Panther from Dillard High School in the Class of 1970.

The means of achieving his goal propelled him to Miami Dade School of Mortuary Science. He graduated with an AS Degree in Mortuary Science in 1973. He then successfully passed the exam of the National Board of Funeral Service of the United States, Inc. as well as the exam of the Florida State Board for funeral directors and embalmers, becoming a fully licensed funeral director and embalmer.  His methods at work have a definite purpose: to serve this present age, his calling to fulfill; to honor the will of God and the work given unto his hands.

Grieving families are not bogged down with sadness for long upon entering his office. He replaces their sadness with laughter after sharing one of a thousand jokes.

How does he remember them all? Yes he jokes, but he knows his craft from the first phone call to the final amen. He has a genuine passion for his work, pays attention to every detail from beginning to end and commands excellence from his staff. His level of skills has made him a mentor for many young funeral directors.

Kurtz is a member of the New Mount Olive Baptist Church. He is the son of Mrs. Evelina Wilcox and is married to Emma Howard Kurtz, his wife of 36 years. They are the parents of three daughters; Monica J. Kurtz, Tracy Kurtz-McFadden (Steven, Sr.) and Larissa L. Kurtz; and proud grandparents of Tristan and Steven, Jr.

Kurtz is actively involved with local, state and national professional funeral associations, including Epsilon Nu Delta Fraternity. He has served his community through participation on numerous boards, in clubs and organizations in an exemplary manner. He served as president of the local NAACP from 1975to 1985. He was the founding president of the Dr. Martin Luther King, Jr. Memorial Committee where he served for over 10 years, a member of the Negro Chamber of Commerce, the St. James Lodge #83 Order of Masons, the Urban League of Broward County, the Broward County Funeral Home Association, the National Morticians Association, and the local Cemetery and Trustee Board. Professionally, he has served as president of The First Regional District of the Florida Morticians Association, Inc. (2013-2015) and currently serves as Chairman of the Board. Always endeavoring to expand his horizons, Richard is also a certified and licensed Realtor and Life and Health Insurance Agent.

He has received numerous community awards and accolades from families expressing their gratitude for the manner in which they were served.

He has not lowered his standards over the years. In fact, he has continued to strengthen his efforts to bring honor and integrity to the funeral profession.

He will be honored during the association’s annual convention here in Fort Lauderdale.  The Florida State Morticians Association invites you, the community to share in a gala evening of fun, fellowship and frivolity on Wednesday, June 22, 2016, at The Westin Fort Lauderdale, 400 Corporate Drive, Fort Lauderdale, Fla. The reception will begin at 6 p.m. followed by the dinner/program at 7 p.m.

We look forward to sharing this joyous occasion with each of you.