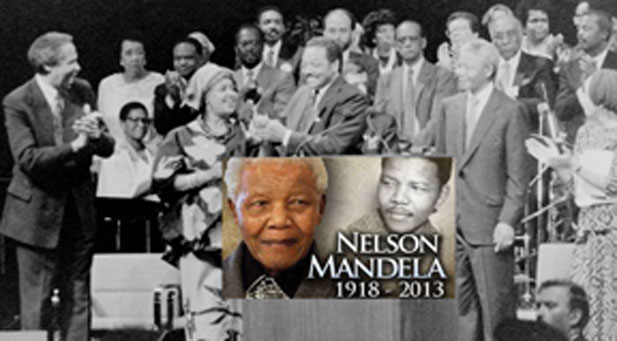 The U.S. Revolution that supported Mandela

WASHINGTON, D.C. (NNPA) – Nearly three decades ago, a handful of prominent Black activists began organizing a movement that would eventually help break the back of apartheid in South Africa and force the U.S. government and American companies to end their support of White minority rule on the continent.

The group called for an end to apartheid and the release of all political prisoners in South Africa. When their demands were ignored, the activists staged a sit-in at the South African embassy on Massachusetts Avenue, N.W.

All but Norton were arrested for trespassing, and their actions made national, then international news.

“There were already protests before, but no one got any momentum,” Berry recalls. “We wanted to get arrested. And we tried to get people lined up to get arrested the next day.”

They got arrested the next day, the day after that and the following day. In fact, every day for a year, the FSAM held demonstrations at the South African Embassy in Washington, D.C.

The nascent movement attracted support from celebrities, members of Congress and other high-profile people, many of whom joined the protest and allowed themselves to be arrested in order to draw more attention to the issue. Before long, chapters of Free South Africa sprang up across the United States.

“Let us not forget that Britain, the U.S. and all of the western powers labeled Mandela a terrorist and steadfastly propped up the apartheid regime—they were on the wrong side of history,” says civil rights leader Jesse Jackson. Mandela is not gone; he remains with us always. He’ll always be a chin bar to pull up on. He has left this earth, but he soars high among the heavens, and his eloquent call for freedom and equality is still heard among the winds and rains, and in the hearts of the people the world over.”

Mary Frances Berry, a professor of history at the University of Pennsylvania, remembers the personal side of Mandela.

“In dealing with him in personal interactions — having the privilege to be with him and talk to him in an informal setting — he was very funny. Not at all full of himself and completely down to earth even though he was larger than life. He considered himself on the same level as an ordinary per-son, and he didn’t take himself too seriously. He loved a joke and always had witticisms.”

While maintaining pressure on the streets, movement organizers organized a legislative assault on apartheid, resulting in passage of the Comprehensive Anti-Apartheid Act of 1986.

It took an entire year to get it passed by Congress and presented to President Reagan for his signature. Instead of signing, however, Reagan vetoed it. But supporters had enough votes to override the veto.

Next in line were U.S. companies that profited from doing business in the White-ruled nation, including Shell Oil, which had been exploiting workers in South Africa. Boycotts were launched against Shell as well as the Krugerrand, a South African currency that would become an illegal import under the Anti-Apartheid Act.

Even while the United States and other governments had condemned Mandela and continued to support the South African government, anti-apartheid movements gained traction. Something about South African apartheid had struck a chord, especially for people of African descent.

“There were chapters of FSAM all over the country and there were many White people in those chapters, but the leadership was always Black. People got involved because our message was simple. At that time, if people didn’t remember Jim Crow or the Civil Rights Movement, then their parents did,” says Berry. “We told people that the South African government passed laws just like what we did here. It resonated with people in this country.”

Melvin Foote, founder and president of the Constituency for Africa, has worked to foster African and African American relations for more than 35 years. He remembers watching Mandela become a global symbol of injustice.

“When people of African de-scent learned about apartheid, it didn’t sound too much different than what happened with slavery,” he says. “And I think with Mandela – who would’ve thought you’d have this tall, very strong, powerful man come out of prison after 27 years with his fist up, and do the things he did. He got us to think differently about Africa.”

Foote says, “He was one of the greatest people to walk the Earth, certainly in our lifetime. There’s discussion of Mandela happening in China, India, all over the world.”

“[South Africans] based their revolution against apartheid on us,” Foote says. “People, especially White people, try not to make that connection, try not to foster any relationship between Africans and Black Americans… but the South African revolution was very much based on the Civil Rights Movement.”

For Berry, Mandela’s life and anti-apartheid work taught her that movements require perseverance, especially during low moments. And, she learned how to make movements effective.

“It reinforced the view that it takes grassroots movements working together with political action to make change,” she states. “If you organize around a simple issue – and messaging has a lot to do with it – and if the issue is clearly one of morality, you can prevail.”