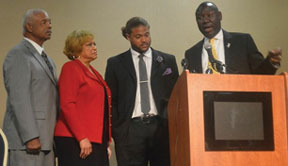 Bobby and Marian Tolan and son, Robbie, are joined by Attorney Benjamin Crump in Houston.

By Cierra Duncan From the Houston Defender

“We all experienced this as a family, as a community, and as a culture but my prayer is that we have not missed the meaning,” Tolan said during a recent press conference in Houston. “This is bigger than Robbie Tolan. This is bigger than Trayvon Martin. This decision has undoubtedly been a blessing.”

The Tolan family was joined by their new attorney Benjamin Crump, who represented Trayvon’s family. Crump made reference to the U.S. Supreme Court, which recently reinstated a civil rights lawsuit filed by Tolan, who in 2008 was shot and seriously injured by a white police officer outside the Bellaire, Tex. home he shared with his parents. Police said they thought Tolan was armed and had stolen a vehicle.

Marian Tolan, Robbie’s mother, said, “I want laws changed. There are laws against racial profiling but they are not being enforced. It’s time for that to change.”

Crump said it was “incredible” that the Supreme Court even heard the Tolan case because of the overwhelmingly high number of cases they are presented with. He then said it is “miraculous” that the court ruled in their favor.

“It is historic when you get a unanimous decision from the United States Supreme Court,” Crump said. “For all nine justices to agree that what happened was wrong…all glory goes to God.”

Crump said that every mother would be “proud to call Robbie their son” and that there was no reason for him to be shot and his family to be victimized.

The Tolans say that their faith has helped them as they continue to pursue justice. Robbie was a 23-year-old aspiring pro baseball player when he was shot. His father, Bobby, played in the Major Leagues.

“Our pastor constructed a prayer just for this case and the Supreme Court,” Marian Tolan said. “In that prayer we prayed for each Supreme Court justice, we asked God to give them a clean heart so that they can do His will,” she said. “From the beginning, I’ve asked God to use this case for change. God saved Robbie for a reason. This decision has placed us in a position to bring that reason forth.”

“There are a lot of people who can be inspired by the dogged determination that has been exuded by the Tolan family,” said Kirbyjon Caldwell, pastor of Windsor Village United Methodist Church. “We have to change these laws. This is not just about what happened six years ago. This is still happening today.”

U.S. Congressman Al Green (D-Texas) said there cannot be a law that allows police to shoot an unarmed person on their own property and go unpunished.

“I agree with the Supreme Court that it is important that this case be reviewed again,” said Green, whose district sits in Houston. “The circumstances of this case, the shooting of an unarmed young man in his parents’ yard, are deeply troubling and raise many questions. I trust that after a just review, a jury will be able to sort through the facts and come to a just resolution.”

U.S. Rep. Sheila Jackson Lee said she and Green will meet with U.S. Attorney General Eric Holder and ask for an investigation in the case based on civil rights violations and any “criminal aspects” in the case.

She urged the community to unite behind the Tolan family and support them as they pursue a new trial. “We must leave this place and demand a new trial for Robbie,” Jackson Lee said. “The trial he never had.”