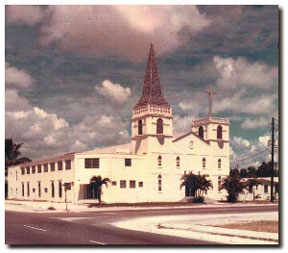 The Trailblazers’ Memorial Legacy to be unveiled on March 26, 2016 at Sistrunk Park, will highlight the community churches that were important to the building of the African American community in Fort Lauderdale. Those who came here from various other places brought with them their desire to practice their religious faith as they found those among them of the same religious per-suasions. Many of these “houses of worship” started in very meager places, but did not deter the residents in their service to the God who had directed their paths here for a better life.

Our faith-based community was nourished in fertile soils and has always served to provide that spiritual service and awakening that was needed. In the earlier years, the churches not only served to the edification of our souls, but like the one school (Dillard) we had, it provided a wholesome social outlet for parents and children. The churches also provided additional learning opportunities to the children who would participate in competitive academics within their church, as well as compete with children of other churches.

There were adult church activities that brought members of the churches together that to-day are non-existent. The Choir’s Union is one such activity that is brought to mind. The choirs from different churches came together once each month to sing, praise and socialize in a spirit of community unity.

The churches that were organized to serve the spiritual needs of the community started with the Piney Grove Missionary Baptist Church in 1904 and was incorporated as First Baptist Church Piney Grove in 1968. The church celebrated its 111th church anniversary in May 2015, several miles away from the place of its birth. The first edifice was located at north-west second street and Brickell Avenue, a bush arbor.

A new edifice and home was erected and dedicated in 1951 at Northwest 11th Avenue and Fourth Street. The present site of this church (in Lauderdale Lakes) became its home in April 2005. Ironically, First Baptist Church Piney Grove is the only church borne from our community that is no longer in the community. However, the families and descendants of its early members are still very much involved and worship at First Baptist Church Piney Grove. We will always recognize this church as a beacon for its many years of service in the community, and the great job it continues to do in our sister city.

The approval process and decision on who would become residents of Dixie Court was made by the City Commissioners who themselves was the Housing Authority. […]