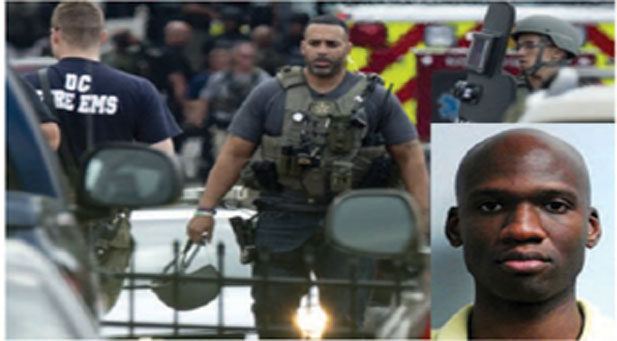 *     The suspect was armed with an AR-15, another rifle and a handgun, a source says

*     The suspect was an IT contractor, says the Navy secretary

*   12 people are confirmed dead in the shooting; suspect also was killed

WASHINGTON, D.C. (CNN) — Besides the 13 people who were killed, eight people were injured in Monday morning’s shooting at the Washington Navy Yard, Washington Mayor Vincent Gray told reporters Monday night. Three of those were injured by gunfire, and the others had other types of injuries, such as contusions and chest pain. Earlier Monday night, Navy Vice Adm. William D. French said 14 people were injured. The 13 dead include suspect Aaron Alexis.

Washington police are confident that only one person was involved in Monday morning’s shooting at the Washington Navy Yard, and they are lifting a shelter-in-place order for residents who live nearby, Police Chief Cathy Lanier said Monday night. Authorities have said suspect Alexis, 34, was killed after an encounter with security.

The ages of those who were killed in Monday morning’s shooting at the Washington Navy Yard range from 46 to 73, Gray said.

The FBI has identified the dead suspect in Monday’s shooting rampage at the Washington Navy Yard as Aaron Alexis, a 34-year-old military contractor from Texas.

But authorities are still searching for more information about him, and they’re asking members of the public for help.

If you have information regarding Aaron Alexis or the Navy Yard shooting, call 1-800-CALL-FBI or visit the FBI’s website.

“No piece of information is too small,” said Valerie Parlave, assistant director in charge of the Washington FBI Field Office. “We are looking to learn everything we can about his recent movements, his contacts and associates.”

In addition to the gunman, authorities said at least 12 people were killed and 14 others were injured in the shooting, which put government buildings on lockdown and sent police SWAT teams rushing to the scene.

The names of those killed, except for the suspected shooter, have not been made public, pending notification of their families.

“We’ll continue to seek information about what the motive is. We don’t have any reason at this stage to suspect terrorism,” Washington Mayor Vincent Gray told reporters, “but certainly it has not been ruled out.”

The other possible suspect was described by police as a Black male, between 40 and 50, wearing an “olive drab-colored” military-style uniform.

“We still don’t know all the facts. But we do know that several people have been shot and some have been killed,” President Barack Obama said Monday afternoon. “So we are confronting yet another mass shooting. And today it happened on a military installation in our nation’s capital.”

Obama called the shooting a “cowardly act” that targeted military and civilians serving their country.

“They know the dangers of serving abroad,” he said, “but today they faced the unimaginable violence that we wouldn’t have expected here at home.”

Witness: ‘He aimed his gun at us’ and fired

Witness: People pushed their way out of building

The violence started unfolding at 8:20 a.m. when several shots were fired inside the southeast Washington facility.

Police spokesman Chris Kelly soon described a suspect as an adult male, about 6 feet tall with a bald head and medium complexion, dressed in a black top and black jeans.

Two witnesses told CNN affiliate WJLA-TV that they heard a fire alarm go off in the building where they worked, then saw a man with a rifle down the hallway as they exited the building.

“He aimed the gun and fired our way,” Todd Brundidge told WJLA.

People frantically ran down stairs to get out of the building, Brundidge said.

“They were pushing. They were shoving. People were falling down,” he told WJLA. “As we came outside, people were climbing the wall trying to get over the wall to get out. …. It was just crazy.”

The injured included a Washington police officer who has been hospitalized, and a base security guard officer, said Metropolitan Police Department spokeswoman Saray Leon.

One person was pronounced dead at George Washington University Hospital, according to Dr. Babak Sarani, chief of trauma and acute care there.

As authorities investigated the deadly shooting, across the country details began to emerge about the suspect.

The FBI said it identified Alexis using fingerprints and ID.

He was in the Navy’s ready reserve, Navy Secretary Ray Mabus told CNN. In the past, he was an enlisted petty officer working on electrical systems. He was discharged from the Navy following a “pattern of misconduct,” a U.S. defense official said. The military is re-viewing his files.

The suspected shooter had an active ID and entered the base legally, according to a federal law enforcement official.

Outside Fort Worth, Texas, friend Michael Ritrovato said Alexis had recently been frustrated with the civilian co-tractor about a payment issue. But Ritrovato said his friend never showed signs of aggressiveness or violence, though he played a lot of shooting video games online.

“It’s incredible that this is all happening, because he was a very good-natured guy,” Ritrovato said. “It seemed like he wanted to get more out of life.”

In Seattle, police said they arrested Alexis in 2004 for shooting out the tires of another man’s vehicle in what Alexis later told detectives was an anger-fueled “blackout.”

Meanwhile, at the Navy yard, helicopters hovered over-head. In one chopper, there appeared to be a police sniper peering out, with a scope at the ready.

The Bureau of Alcohol, Tobacco, Firearms and Explosives sent a team of about 20 special agents to the scene, a law enforcement official said. The team was the same group that helped apprehend Boston Marathon bombing suspect Dzhokhar Tsarnaev, the official said.

Emergency personnel, the FBI, U.S. Capitol Police and local D.C. police responded to the shooting, shutting down traffic in the area on the District’s south side along the Anacostia River. Some people were evacuated, and others sheltered in place.

Paul Williams, who works at a nearby nonprofit, was headed to his office when he witnessed panic at the Navy yard.

At first, he thought it was construction noise, but less than a minute later, he saw hundreds of people coming toward him.

“I didn’t know what was happening. I just ran with them,” Williams said. “Everyone seemed scared. People were crying. People were being consoled and calling loved ones and family.”

Security was stepped up at the Pentagon.

And at least eight schools were on lockdown as a pre-caution, the Washington public schools said.

Air traffic to Reagan National Airport in northern Virginia, the closest airport to downtown Washington, was suspended after the shooting but later resumed, the Federal Aviation Administration said.

Officials postponed a Washington Nationals baseball game that had been scheduled for Monday night at Nationals Park, just a few blocks away from the Washington Navy Yard.

The headquarters for Naval Sea Systems Command — the workplace for about 3,000 people — is the largest of the Navy’s five system commands. It has a fiscal year budget of nearly $30 billion.

“With a force of 60,000 civilian, military and contract support personnel, NAVSEA engineers, builds, buys and maintains the Navy’s ships and submarines and their combat systems,” the Navy said.

The Washington Navy Yard — the Navy’s oldest land establishment — was created in 1799 following an act of Congress, according to the Naval History and Heritage Command. Originally envisioned as shipbuilding and fitting facility on the Anacostia River, it serviced some of the Navy’s most famous early vessels, including the USS Constitution.

Burned during the War of 1812, the Navy Yard was trans-formed into a center for ordinance and technological development. The facility was the world’s largest ordnance plant during World War II, but its military role steadily diminished during the Cold War era.

Today, the Navy Yard includes the headquarters of Naval District Washington and is home to a naval museum. The area around the facility has been marked in recent years by significant commercial and residential revitalization.