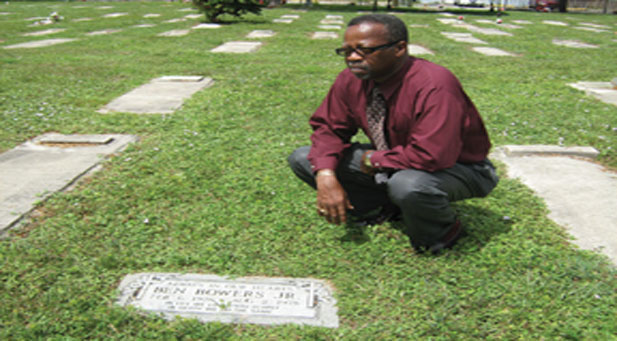 Where is the dignity and integrity in the death and burial business?

“It was like losing him all over again...”— James Bowers

James Bowers searched the grounds of Hallandale Beach’s municipal cemetery for his father’s grave. He thought it would be easy to remember. Looking at the ground he traces his steps; it’s about 12 steps from the tree, turns right but he couldn’t find it.

“I went out to have a little sit down with my Dad but I couldn’t find him,” Bowers tells the Westside Gazette. “It was like losing him all over again. It leaves a hole in your heart when you walk around here and there at the cemetery and you still don’t know if that is the exact grave because you are only going by what someone tells you. My daughter wasn’t born when Dad died. If she were to come out here, she wouldn’t even know where to begin.”

Complaints to Hallandale City commissioners resulted in the formation of an ad hoc cemetery committee, who installed a computerized grid mapping system where families input names of loved ones and it gives plot location.

Growing up across the street from the cemetery, Bowers, like many residents, has generations buried in the more than 140-year-old cemetery but found using the computerized system inadequate in finding exact locations on the grounds of the cemetery. “It gives a general location but since the rows are not labeled in the cemetery you still have no way of knowing exactly where it is,” Bowers says.

In the past five years cemeteries have under fire for the treatment of loved ones in their care. Burial, always big business is even bigger as corporations take over independently owned cemeteries and funeral homes driving up burial prices while perpetual care of the remains fall to expediency and bureaucracy.

It’s a long-term commitment Hallandale sought to divest itself. About the time Bowers began to complain about the cemetery care in 2010, Commissioners invited Dade County mortuaries to bury there. They wanted to fill the cemetery to capacity, leaving no room for residents.

Community members on the ad hoc cemetery committee were instrumental in stopping the practice citing while Dade burials paid a onetime fee, Hallandale residents paid their taxes every year and had the right to be buried in their com-munity cemetery.

Bowers and his sister pooled their money to purchase another headstone. Many of the graves are so old the names have eroded. Some have caved in, some only a tuft of grass with one faded silk flower re-mains and one with only fresh flowers laid on bare grass not-ing that someone still cares for the loved one buried there al-though the grave must have sunk into the earth and can no longer be identified.

The Cemetery Committee, Bowers and residents have re-quested benches, more shaded areas, painting the older tombs and other renovations but are ignored by the Public Works Department.

Historically slave’s graves were trampled on by livestock as slaves were buried in the least profitable area of the plantation. Yet, care for the dead was still a big affair as eye witness accounts attest the number of slaves who came from other plantations for the burials which were usually held at night because that was the only time  slaves weren’t chained to a sun-up-to-sun- down working schedule.

Residents remember the south side of the Hallandale cemetery being for whites only and remained that way for some time. Most of the area on that side of the cemetery is paid for although once white flight began in the 1970’s some families did not come back to be buried there. Family plots are squared off by short cinder blocks, headstones for Eliason, Schwartz and Hedvig, whose families in some cases have visited graves and provide new markers.

‘I remember the only Black buried on south side was the first Black man to die in the Vietnam War. They had a 21-gun salute and everything. When I was little a lot of white folks were on the southside. We wondered why the grass on the south side was always green. Were the sprinkler systems working only on the southside? We never saw sprinkers on the northwest side,” Bowers says.

Hallandale Commissioner Anthony Sanders admits the cemetery needs a system on the grounds in tandem with locating plots on the computer and they will need more space. “We know there is a need for on-site markers along with the computer mapping system. The cemetery committee is continuing to study the best way to solve the problem. For additional space we hope to build a mausoleum in a space that won’t block the view of homeowners living around the cemetery.

The cost of maintaining a cemetery grows each year. Traditionally, a single payment is made at the time of burial, but the cemetery incurs expenses in maintenance over many decades and finds their funds are not sufficient for the costs of long-term maintenance. All of these issues tend to put pressure on the reuse of gravesites within cemeteries. The reuse of graves already used for burial can cause considerable upset to family members.

“Who’s responsible for caretaking of the names on the graves?” Bowers wonders. “Are they supposed to maintain it regardless of the time? When you pay $300-$500 to dig a hole and cover it up, what do they do with that money? My sister and I pooled our money to put a new stone on our father’s grave, and we still wouldn’t be able to find it. Most people don’t have the money to buy another monument.”