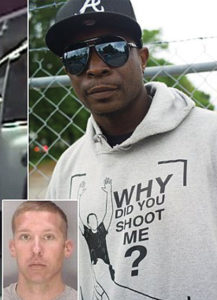 The family of Stephen Clark, 22, is mourning the death of the young man after Sacramento police shot him dead. The police explained that they shot Clark 20 times because they suspected that he was carrying a weapon.

Reporting the case on Twitter, Shaun King, using the Black Lives Matter hashtag, wrote, “First the @SacPolice said they shot and killed 22-year-old #StephonClark and denied him any first aid because he had a gun. Then, they finally said he didn’t actually have a gun, but a crowbar. Now, they admit it wasn’t a gun or a crowbar, but HIS CELLPHONE.” And where was the young man shot? Shaun answered that in the tweet, saying, “IN HIS OWN BACKYARD.”

Friends, family, and activists are asking the police why they had to shoot the unarmed Black man 20 times, yet he wasn’t armed and was in his grandparent’s backyard.

According to the police, Clark was on Sunday night seen breaking at least three vehicle windows, leading to a search for him. In addition to the car windows, Sheriff’s deputies also said officers in a helicopter spotted the young man break into a neighbor’s glass door.

Two officers went after him and he ran to his grandparent’s backyard. Cops said he declined to obey orders to stop and show his hands. He then, charged towards the officers with an object extending out of his hand, the department said. Believing that the young man was pointing a gun at them, they opened fire on him, fearing for their own lives, the department explained.

Some five minutes after he was shot, officers proceeded to search him only to find out that he was not armed except that he had a cellphone, which they discovered near his lifeless body, the department revealed.

“He was at the wrong place at the wrong time in his own backyard?” Clark’s grandmother, Sequita Thompson, told The Sacramento Bee. “C’mon now, they didn’t have to do that.”

The police didn’t immediately release information on how many shots were fired at the young man and they refused to release any details until the victim’s relatives were notified. The department pointed out that the two officers involved in the shooting have been with them for two years and four years, and that each one of them had at least four years of previous experience with the law enforcement.

Both were put on administrative leave.

The family said Clark is succeeded by his two sons, one and three-years-old.

Black Lives Matter is taking the matter seriously and have termed it police murder. They’ve fronted some tough questions to the police and they vowed not to rest until they get answers

2019 is important to African American Men, because the opportunities are boundless and amazing. If you can conceive it, you can achieve it. The only barrier holding Black men back is preparation, knowledge, and education. […]