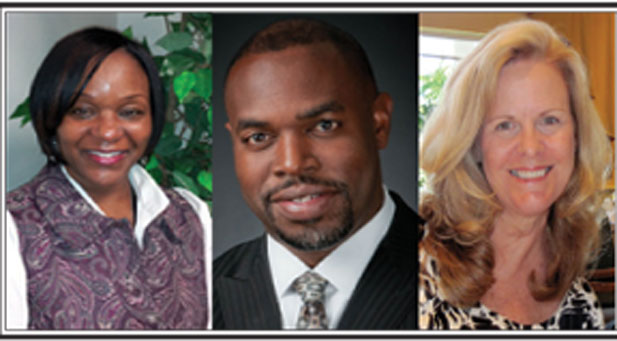 Student Success Opportunity Schools (SSOS) is a strategic initiative by Broward County Public Schools (BCPS) to review the performance of schools utilizing a variety of criterias, such as student academic performance (as indicated by FCAT scores), school enrollment, climate, facilities and other local factors. SSOS provides an opportunity for the district to work with parents, students, staff and community members to discuss the potential educational options available for students that are sustainable and promote increased achievement. Pictured, l to r: Veda Hudge, Dr. Desmond Blackburn and Leslie Brown.

Broward County Public Schools (BCPS) officials recently shared some of their findings regarding the Board’s Student Success Opportunity Schools (SSOS) initiative, during a presentation on March 15, at a special session of the 100 Black Men of Greater Fort Lauderdale’s Leadership Academy.

Wayne Lovette is the Education coordinator for the 100 Black Men of Greater Fort Lauderdale and Science Coach at Broward Estates Elementary. He outlined the purpose of the day’s meeting.

“The purpose of today’s forum was to help our parents and mentees understand the plan for the re-purposing of our schools and what that means to our community. We hope that our students who were present here today and also the parents will now know that these schools are not being closed; they are being changed to meet the needs of the community as well as the students of the schools.”

Two years ago after receiving a mandate from Florida’s Department of Education to address the issue of underachieving schools, Broward County School Board officials, under the leadership of Broward School Board Superintendent Robert Runcie, decided to take proactive measures to remedying schools, which were failing.

The initiative was designed to stem the tide of underachieving schools in the district. Their efforts included a series of eight county wide public hearings, school assessments, and surveys to determine and evaluate the individual needs of those schools targeted for innovative changes. The process of compiling data by school board officials resulted in some bold and decisive measures.

Dr. Blackburn wasted no time during the presentation by getting straight to the point on why the changes in certain schools were necessary and targeted for re-purposing.

“Two years ago Superintendent Robert Runcie began what was known as Student Success Opportunity Schools Program – long story short, it’s a way of us as a school system to determine that some schools, some structures, some programs are just not doing what they need to do for your kids – acknowledging that brutal fact and then doing something about it.”

A year after the process began beginning in the 2012-2013 school year, several schools which had shown subpar performances over a number of years were transformed to offer students attending those schools with greater opportunities to achieve success. These schools were then re-purposed and are now operating under the umbrella coined as SSOS.

The State of Florida identified four schools that were failing at the time, giving Broward County a mandate to change what was going on at those schools. The schools noted were: Sunland Park Elementary, Lauderdale Manors Elementary, Lauderhill Middle, and Arthur Ashe Middle School.

These schools were examined over a 10-year period and found to consistently fall below the standards used to access academic achievement by the State of Florida, and designated as  either D or F Schools.

“The F doesn’t necessarily mean that all is wrong but it’s enough for us to believe we need to take a hard look at it,” added Dr. Blackburn.

Leslie Brown outlined the steps taken by the school board’s coordinated effort to revamp a system in need of repair. She said there were 34 data elements which were used by the school board during the process. Some of those included; customer surveys (student/parent), compiling academic data, community school meetings, chief of staff meetings, and think tank established.

This process resulted in the school board developing concepts designed based on the specific needs of the community where targeted schools were located.

Veda Hudge works directly underneath Dr. Blackburn and is charged with working on school improvement and handles school accreditation to make sure schools comply with state requirements. Hudge was instrumental in coordinating many of the community forums and outreach measures to allow parents input in the decision making process to best determine the needs of schools in their community.

“We had a situation which presented us with an opportunity. And we wanted to seize this opportunity to really do something great for our students here in Broward.”

According to Hudge, what the State of Florida referred to as “closure” the Broward County School Board took it upon itself to brand their initiative “re-purposing.”

One example is  the case of Lauderdale Manors Elementary included within the services provided are social services, student support initiatives, as well as some School Board officials relocating from the downtown School Board administrative building directly into the school; making for a more hands-on approach to address the specific needs of that school and com-munity. This also insures greater access to much needed resources.

Arthur Ashe Middle School is now a technical center. Lauderhill Middle is in the process of becoming Lauderhill High School by adding an additional grade each year. And Sunland Park Elementary is now Sunland Academy, which focuses on the pre-school and primary school levels.

Dennis Wright, President of the 100 Black Men of Greater Fort Lauderdale provided his overall assessment of the education forum.

“What went on today was a very important dialogues between our school board education systems our young men and their parents. This is something that we do on a regular basis and continue to do because it’s important that we have that direct conversation with them to help them improve our over-all education system. And the relationships that the school system the parents and the community all have because all three of those become a part of our child’s education experience.”

Wibete Hay is one of the parents who attended the forum. She said she had concerns about the length of time which had passed before the school board had taken action to address the problems which had gone on over a long period of time at the schools which were failing.

“It seems like their trying to do a better job of creating an environment of better learning for those schools that are not doing well. But at the same time I have to look at it like, OK you’ve had this data for so many years. Did they wait until the state came down and said you have to do something about it? And why are these schools always in the predominantly Black areas?”

Alex Paige is a 17-year-old senior at Northeast High School in Oakland Park. He is a part of the 100 Black Men’s Leadership Academy and plans to attend Howard University in Washington D.C. where he plans on majoring in Communications.

“Today’s meeting was very helpful. What I learned was all those stereotypes about educators and people in high places taking a back seat in and not being hands on was a lie because for them to really go out of their way to talk to people like us and give us a look at the big picture idea but the small examples in forums so as this that turned into those ideas,” said Paige.

Courtney Plummer is a 15-year-old freshman at Coconut Creek High who also is a member of the Leadership Academy.

“With today’s session I came in the mindset that the school system was not how it should have been. They waited too long in my opinion. But now I understand that it’s more than what you hear and what you see on the outside. When you finally get an inside view, then you understand what’s going on.”

The 100 Black Men of Greater Fort Lauderdale celebrated a record turnout with some 100 players signing up for their 5th Annual TBC Golf Tournament and Scholarship Luncheon, at the Palm-Aire Country Club […]

Please join us in supporting the upcoming Warner Bros. Pictures release of the JACKIE ROBINSON biopic “42 – The True Story of an American Legend”. The film opens nationwide on Friday, April 12th and needs […]