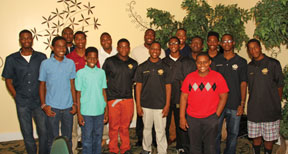 The Teamsters Union of America was well represented in the tournament with a large contingent of players, some of whom came from as far away as Minnesota and New York to support the cause. D & B Tile was a first time participant and pledged their continued support of the local 100.

The 100 Black Men of Greater Fort Lauderdale celebrated a decade long commitment of mentoring young Black males and providing scholarships for all mentees who graduate from high school while completing the mentoring groups’ Leadership Program. Each mentee which completes the 18-month program in good standing is awarded an annual scholarship stipend for the duration of their college education, provided they fulfill the requirements outlined by the local 100 chapter.

100 Black Men of Greater Fort Lauderdale President Dennis Wright has been at the helm of the organization for a decade leading the charge to help mold young boys into young men to be-come productive members of society. He is continues to champion the cause for young Black males challenging them to be the best that they can be in school, at home, and in their community.

“I like to refer to today’s event as ROI-Return on Investment.  We’ve invested a lot of time in some of these young men they’ve invest a lot of time in us and in their education. Today we’re seeing the return on that investment. These young men are going off to school. They’re getting scholarships from the 100 Black Men of Greater Fort Lauderdale. They’re continuing their education. They’re going to turn out to be positive contributors to society. This is great. This is what it’s all about.”

The most recent 100 Leadership Academy graduates all choose to remain in the state of Florida to pursue their college education with Deese selecting Florida Southern in Lakeland, Keel choosing Bethune-Cookman University (B-CU in Daytona Beach, and Page opting to attend the University of Central Florida in Orlando.

Christopher Keel captured his sentiment regarding what being a part of the 100 mentoring pro-gram had shown him, by reciting a quote he attributed to renowned author and scholar Dr. Michael Eric Dyson. Keel reflected while receiving his scholarship award.

Although there were several highlights offered up throughout the luncheon ceremony 100 Leadership Academy graduate, Andy Honorat, who spoke as a former mentee, received a most enthusiastic response garnering a rousing round of applause as he explained what being a part of the program meant to him. Honorat is a Dillard High graduate who attended Full Sail University in Orlando. He presently works in the Sports Production Department at Madison Square Garden in New York City.

“The 100 is a very great program. I started at a young age back in 2008. It really provided some positive reinforcement for my life as a young man. It helped me to be financially independent and to grow to become a more positive young man- more hard working, more passionate, and dedicated in everything I studied.

Rodney Baltimore of HOT 105/WHQT served as the Master of Ceremony for the luncheon Westside Gazette Newspaper Publisher Bobby R. Henry, Sr. delivered a rousing and spirited speech entitled, “It Starts with Me.”  Henry’s remarks were punctuated with a mixture of laughs and applause.

“As I go into my twilight years I try only one desperate attempt to change only my family-those close to me. Perhaps they will have learned it and now as I lay on my death bed I suddenly realized if I had only changed myself first then by example, I would have changed my family. From their inspiration and encouragement I would then have been able to better my country. And who knows? I may have even changed the world.”

“I think the Leadership Academy is a necessary tool in our society to help bridge the gap between of youth who may be misguided. It’s a common misconception that only the kids who aren’t doing well need tutoring when in reality all kids need tutoring because every kid can do better.  So the 100 Black Men is that organization that makes all students who participate better.”

100 Mentor Norvel Bethel is the Leadership Academy Coordinator and is charged with the responsibility of laying out the program to keep mentees engaged as well as informed about the world around them. He, along with other mentees, share some of their real life experiences so that mentees will be better prepared when faced by similar scenarios in life, as they encounter them as adults.

“I’m responsible in making sure that our location is in place, logistics, and making sure that the curriculum is put together for each of the tracks-whether it be Economic Development, Education, or Health and Wellness.”

Albert Tucker is the Vice-President of Multi-Cultural Tourism for the Greater Fort Lauderdale Convention & Visitors Bureau and a strong supporter of the 100. He touted the success of the organization regarding the impact it is having on the community and the mentees it serves.

“Every year I see two things about the organization worth noting. The young men are getting exposed to some incredible leadership but also the leaders are getting exposed to some incredible opportunities that they’re sharing. Not only the young men are growing but the leaders of the organization are growing in order to help our community.”

Broward County Public Schools again for the annual Broward Million Father March take a child to the first day of school campaign – encouraging fathers, relatives, men and significant male caregivers to take their children to school on the first day of classes […]