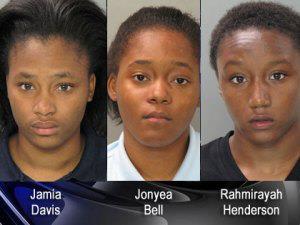 CHESTER, Pa. – Six teenagers were in custody Friday on charges they brutally beat a neighbor on her stoop “just for fun” and then posted cellphone video of the attack on Facebook, authorities said.

Buying Xanax Uk Four 16- and 17-year-old girls were charged as adults in the attack on the 48-year-old woman, a crime that has shaken this struggling city of about 30,000 residents just outside Philadelphia. The girls were charged with aggravated assault, reckless endangerment, burglary and harassment. Another teen girl and a 19-year-old woman were also arrested later Friday afternoon.

The woman, whom police described as “mentally challenged,” was punched, kicked and hit with a shoe and chair, and suffered cuts and bruises but no broken bones, authorities said. Her name was not released.

Buy Alprazolam Online Legally The attack occurred Tuesday at a two-story stucco house, where the woman lived, down the block from a small grocery. No one answered the door at the building Friday.

“It appears just for fun,” Chester police Detective James Nolan said. “There hasn’t been a discernible explanation as to why.”

It showed a group of girls walking down a sidewalk then suddenly attacking a woman sitting on her stoop. The teens follow the woman into her home as she tries to escape, taking turns punching and beating her. They quickly flee.

http://learnwithojo.com/product-tag/blue/feed/ Pate said the woman regularly sits on her front stoop and sometimes curses people or asks for cigarettes.

Best Place To Buy Xanax Uk Chester has long battled high rates of crime and poverty. Mayor John Linder said youth should understand that attacking people will not be tolerated.

http://bisnisbajumu.com/tag/pasar-borong-nilai-3/feed “This is an egregious attack,” Linder said. “It’s unbearable.”

How To Order Xanax Online Cod