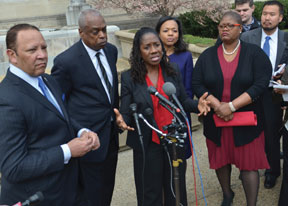 The leaders expressed their concerns about the future of the civil rights gains made under the Obama Administration. They also expressed concerns about the recent rash of hate crimes, the consent decree involving Baltimore’s police department and the impact that any potential, “mythical” voting fraud investigation could have on voters’ rights.

During an interview with Fox News earlier this year, President Donald Trump announced that Vice President Mike Pence would lead a commission to investigate allegations of voter fraud.

ThinkProgress.org reported that President Trump claimed that he would have won the popular vote if it were not for three to five million illegal votes. President Trump has never offered any evidence to support this claim.

http://audiodescription.co.uk/resources/adlib/ http://audiodescription.co.uk/resources/adlib/ “I asked [Attorney General Sessions] to counsel the president against the creation of such a task force and a commission, because that commission will be seen to intimidate our communities,” said Ifill. “In the absence of any evidence of voter fraud, he should be counseling the president away from such a course. We don’t need an investigation into something that doesn’t exist.”

http://cnt-aranjuez.org/?s=남원오피(카톡- Mo27)〖m oo27.c０M〗출장가격출장서비스Y☻♂2019-03-19-23-59남원↘AIJ♩출장최고시출장샵후기역출장안마✐출장업계위╣콜걸강추₪남원 http://cnt-aranjuez.org/?s=남원오피(카톡- Mo27)〖m oo27.c０M〗출장가격출장서비스Y☻♂2019-03-19-23-59남원↘AIJ♩출장최고시출장샵후기역출장안마✐출장업계위╣콜걸강추₪남원 According to the Brennan Center for Justice at New York University School of Law, a non-partisan public policy and law institute, “claims of voter fraud are frequently used to justify policies that do not solve the alleged wrongs, but that could well disenfranchise legitimate voters.

Ifill also noted that there were a number of issues that Attorney General Sessions “is not fully informed about,” including current police reform efforts involving consent decrees and some ongoing voting rights discrimination cases.

At a press conference outside of the Department of Justice after the meeting, the civil rights leaders said that they received no clear commitments to address the issues that they raised during their meeting with the attorney general.

Can I Buy Xanax Uk Can I Buy Xanax Uk Clarke noted that the group did not discuss the memo penned by Attorney General Sessions that overturned an Obama Administration directive that called for reducing the use of private prisons to house federal inmates.

Clarke called the decision “incredibly problematic” and said that it reversed years of work and effort on the bipartisan justice reform.

Sharpton continued: “We were not hostile, but we showed holy indignation and we’ll continue to be indignant about any threats to our civil rights.”

Ebola won’t block my return to the motherland

In five short years, the cable giant Comcast has achieved incredible success with its Internet Essentials program, connecting 750,000 low-income households to the power of the Web. […]