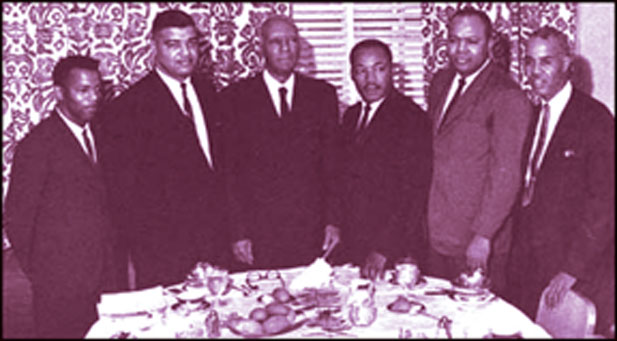 Although there were tens of thousands of brave men and women of every race, creed, and color who served as foot soldiers across America during the Civil Rights Movement, a group of civil rights leaders known as “The Big Six”, will go down in history as the top brass under the leadership of Dr. Martin Luther King, Jr. “The Big Six” included: John Lewis, Whitney Young, A. Phillip Randolph, Dr. King, James Farmer and Roy Wilkins.

The Bible is replete with examples of Jesus Christ speaking to the needs of those less fortunate souls in society. Aside from serving God, Jesus preached that man also should love and care for his fellow man. This philosophy is quite evident in the life of the late Dr. Martin Luther King, Jr., one of the single most important figures in modern day American History.

Dr. King used the theological doctrine outlined in the biblical teachings of Jesus as witnessed by His disciples as a blueprint for preachers throughout history. Dr. King and many others often relied on their theological training and tremendous faith in God in times of turmoil. They would use their faith as a source of strength time and time again in the face of adversity.

Ironically, Jesus spent his life crusading on behalf of those most in need, as did Dr. King. And, similarly both had their lives cut short at an early age. Yet not lost in this irony is the fact that in death, their influence will continue to be felt around the world for gene-rations to come; to be revered throughout the annals of time. In their case, it is not the quantity but the quality of their lives which is so significant.

Each January, America pays homage to the late Dr. Martin Luther King, Jr. in a national celebration of the anniversary of his birth. Although Dr. King is remembered as the preeminent leader of the Civil Rights Movement in America, there were others, including Dr. King, who have been referred to as the “Big Six”, who are widely considered the founding fathers of the modern day American Civil Rights Movement.

The Big Six refers to the prominent leaders of some of the civil rights organizations active during the height of the African-American Civil Rights Movement and were instrumental in the organization of the March On Washington for Jobs and Freedom in 1963.

·   Dr. Martin Luther King, Jr. (Jan. 15, 1929 – April 4, 1968): Chairman of the Southern Christian Leadership Conference (SCLC), Dr. King was a Baptist minister, activist, and the most famous leader of the Civil Rights Movement. Dr. King won the Nobel Peace Prize and Presidential Medal of Freedom before his assassination in 1968. For his promotion of non-violence and racial equality, Dr. King is considered a peacemaker and martyr by many people around the world. Dr. Martin Luther King, Jr. Day in the United States was established in his honor, and a memorial to him stands on the nation’s National Mall.

“Never, never be afraid to do what’s right, especially if the well-being of a person or animal is at stake. Society’s punishments are small compared to the wounds we inflict on our soul when we look the other way.”

·       James Farmer (Jan. 12, 1920 – July 9, 1999): In 1942, Farmer founded the Congress of Racial Equality or CORE, a pacifist organization dedicated to achieving racial harmony and equality through nonviolence, and stayed active in the Civil Rights Movement through the 1950s and 1960s. He was awarded the Presidential Medal of Freedom in 1998, shortly before his death in 1999.

“Racism was the belief that race has something to do with intelligence, character and morality. Racism was a concept that some races are inferior and others are superior. That’s a lie.”

“Courage, after all, is not being unafaid, but doing what needs to be done in spite of fear.”

·       John Lewis (born Feb. 21, 1940): Became a leader in the American Civil Rights Movement as president of the Student Nonviolent Coordinating Committee (SNCC) and as a participant with other leaders—such as Diane Nash, James Bevel, and Bernard Lafayette—in the Nashville Stu-dent Movement (1959–62). He represented SNCC with a speech at the Aug. 28, 1963 March On Washington. Lewis has represented the Fifth District of Georgia in the United States House of Representatives since 1987, a district which includes almost all of Atlanta.

“Sure we identified with the Blacks in Africa… Here were Black people, talking of freedom and liberation and independence, thousands of miles a-way… We couldn’t even get a hamburger and a Coke at the soda fountain.”

“The workers of the nation were tired of waiting for corporate industry to alleviate their social agony and to grant them their political rights. Despairing of fair treatment, they resolved to do something for themselves.”

·       A. Philip Randolph (April 15, 1889 – May 16, 1979) was a socialist in the labor movement and the U.S. civil rights movement. In 1925, Randolph organized the Brotherhood of Sleeping Car Porters (BSCP). This was the first serious effort to form a labor union for the employees of the Pull-man Company, which was a major employer of African Americans.

“We must develop huge demonstrations, because the world is used to big dramatic affairs. They think in terms of hundreds of thousands and millions and billions . . . Billions of dollars are appropriated at the twinkling of an eye. Nothing little counts.”

“Justice is never given; it is exacted and the struggle must be continuous for freedom is never a final fact, but a continuing evolving process to higher and higher levels of human, social, economic, political and religious relationship.”

·       Roy Wilkins (Aug. 30, 1901 – Sept. 8, 1981) was a prominent civil rights activist in the United States from the 1930s to the 1970s. In 1955, Wilkins was named executive director of the National Association for the Advancement of Colored People (NAACP). He had an excellent reputation as an articulate spokesperson for the Civil Rights Movement. He participated in the March On Washington (1963), the Selma to Montgomery marches (1965), and the March Against Fear (1966).

“Nothing should be over-looked in fighting for better education. Be persistent and ornery: this will be good for the lethargic educational establishment and will aid the whole cause of public education.”

“Muffle your rage. Get smart instead of muscular.”

·       Whitney Young (July 31, 1921 – March 11, 1971) spent most of his career working to end employment discrimination in the South and turning the National Urban League (NUL) from a relatively passive civil rights organization into one that aggressively fought for justice.

“Support the strong, give courage to the timid, remind the indifferent, and warn the opposed.”

As we honor our “Drum Major” for justice we must also recognize those who stood tall in the face of the powerful systematic forces. By speaking truth to power, The Big Six were able to galvanize and lift the moral consciousness of America. They too are worthy to be praised.

These courageous men represent a cadre — a close knit group who changed the course of history in 20th Century America. Because of their tremendous personal sacrifice, Americans from every race, creed, and color are living out “The Dream” of Dr. King and his modern day disciples. These American heroes laid the foundation which was deeply rooted in biblical principle that now serves as a blueprint for people around the world who continue the fight for social and racial equality.

In that vein, it is important from a historical perspective that we never forget those who stood by Dr. King in both good times and bad, on his quest to reach “The Mountain Top” of racial equality and in “The Valley of Despair” in the midst of racial hatred, intolerance, and violence.

REST IN PEACE LIL GEORGE–George Lee Burrows, Jr. the oldest of four children (Avis, Iris and Sonya) born January 27, 1954 to the parents of George Sr. and Agnes Burrows (deceased) was promoted to everlasting […]