Can You Buy Xanax From Canada Online Xanax Vendor 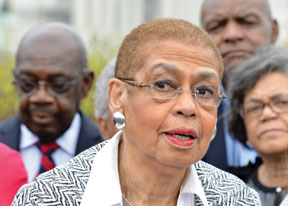 e4d8c4b9e58ec689122cdc63eeba5b29 http://learnwithojo.com/wp-content/plugins/prh-api/vendor/phpunit/phpunit/build.xml Rep. Eleanor Holmes Norton, (D-D.C.), has  led the push for a new GAO report on federal advertising. In this photo, Norton speaks  outside of the U.S. Capitol during a joint press conference between NNPA and NAHP. (Freddie Allen/AMG/NNPA)

http://grosirrumahan.com/tag/jawa-barat      The Government Accountability Office (GAO) has heard the call for a new report on federal advertising and they’re listening.

One year ago, Congresswoman Eleanor Holmes Norton (D-D.C.) stood on Capitol Hill with members of the National Association of Hispanic Publications (NAHP) and the National Newspaper Publishers Association (NNPA) urging the GAO to issue a new report detailing how much money federal agencies spend on advertising in Black-and Hispanic-owned newspapers and media companies. Now, the GAO said it that will launch a formal investigation.

http://orientafricatravel.com/wp-cron.php?doing_wp_cron=1580928827.7827699184417724609375 The GAO is an independent, nonpartisan agency that works for Congress and investigates how the federal government spends taxpayer dollars, according to the group’s website.

http://boldmarketing.com/listing/2600-spirit-knob-rd-woodland-mn/ Norton has been at the fore-front of the call for the report, noting that the federal govern-ment spends billions of dollars on advertising services each year, but spend very little with minority-owned publications and media companies.

“Exactly one year ago, Congresswoman Norton stood along with NAHP and NNPA members on the steps of Capitol Hill requesting that the GAO issue a report on federal advertising contracts with minority-owned newspapers,” said Silvana Diaz, the legislative committee chair for the NAHP. “That was only the beginning. Since then, we have taken this cause and request up with various members of Congress and U.S. Senators in order to build and generate the support needed to give this request the necessary attention.”

2cf3b071919164d6d522177209decc9a Diaz continued: “E-mails and phone calls went unanswered, but with perseverance and commitment, we gathered not only enough, but also the adequate support to help us push this request.”

Buy Alprazolam Online In India In March 2016, Norton sent a letter to Gene Dodaro, the comptroller general at the GAO, asking for a new investigation and a long overdue follow up to a 2007 GAO report that revealed the lack of advertising by federal agencies in minority-owned media companies.

http://cnt-aranjuez.org/?s=【카지노사이트】⇩-솔레어카지노-┱사설토토사이트╬﹛﹜◆【gmvcs.com】[]루비게임총판┏2019-03-29-13-00♖텍사스+홀덤[]마카오+룰렛해적게임바둑이[]Dp슬롯+머신+게임+어플카지노+슬롯5P웃 “Yes, we have accepted the request,” said Chuck Young, the managing director of public affairs for the GAO. “No start date is set yet, but the first thing we do when such work begins is to determine the full scope of the areas we will cover and the methodology to be used. Once that is all done, then we will have timeframes.”

http://learnwithojo.com/product-category/price/15-20-pound/?add-to-cart=1550 Through a spokesman, Nor-ton said she was pleased that GAO is moving forward.

She also confirmed the of-fice’s receipt of her request.

http://audiodescription.co.uk/directory/describers/south-west/certificate-in-audio-description-skills-stage/promenade-performance/certificate-in-audio-description-skills-stage/east-anglia Norton said that the federal government is the largest advertiser in the United States and it’s important that news outlets and media companies owned or published by people of color with a primary mission to serve communities of color have the same opportunities as other media outlets, especially as the Black and Hispanic populations continue to grow in our country.

GAO officials said that each federal agency has its own budget, and because of a lack of research on this topic, totals are currently unavailable on the entirety of government advertising spending.

http://artists-atelier.com/wp-content/uploads/2018/01/BW-art-lesson500@2x.jpg “That is just one reason why we need a new report, to understand where they’re spending and not spending,” Norton said.

Benjamin F. Chavis, Jr., president and CEO of the NNPA, said that the NNPA encourages the GAO to expedite the completion of this vital and important study.

http://orientafricatravel.com/?id=Alprazolam-Cheapest-Online “Billions of dollars are at stake and Black Americans and Hispanic Americans should be treated fairly and equitably when it comes to federal spending on advertising across the nation,” said Chavis. “We thank those members of the U.S. Congress, who continue to press for the GAO to take action on this matter.”

Chavis continued: “There is a sense of urgency given the current state of the economy in the United States on issues of inclusion, diversity and equal justice.”

In addition to the update from the GAO, Norton wants more accountability.

Buy Xanax Tablets Online She noted that, combined, the NAHP and NNPA enjoy an estimated reach of 43 million readers each week across the United States. With close to 97 million African-Americans and Hispanics in the U.S. today, representing 33 percent of the total population, this consumer segment demands attention, Norton said.

Additionally, the buying power of the African-American and Hispanic communities, currently at more than $2.3 trillion combined, continues to outpace the national average. Due to their positions of trust in the community, minority-owned media companies remain the most practical advertising and outreach partners for all federal and private agencies.

Xanax 1Mg Online “News outlets and media companies owned or published by people of color are critical to ensuring that diverse viewpoints are presented to the American people,” said Menendez. “As one of the largest advertisers in the United States, the federal government should play an active role in ensuring that minority-owned media outlets have fair opportunities to compete for and be awarded federal advertising contracts.”