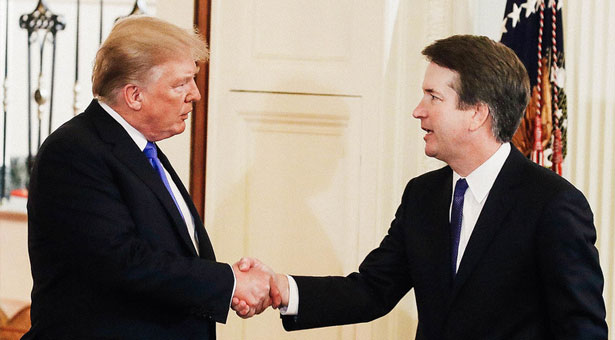 President Donald Trump introduces Judge Brett M. Kavanaugh as his nominee to the Supreme Court during an event in the East Room of the White House on Monday in Washington. Mark Wilson/Getty Images

LDF opposes the confirmation of Judge Kavanaugh to the Supreme Court based on our detailed review of the limited available record of Judge Kavanaugh’s long career in public life and because of the unprecedented context in which this nomination arises.

“Judge Kavanaugh’s record demonstrates that his addition to the Supreme Court would gravely imperil critical civil rights protections and threaten progress on matters of racial justice,” said Sherrilyn Ifill, LDF’s President and Director-Counsel.  “Even more alarming are the circumstances under which this Senate seeks to confirm Judge Kavanaugh. From the moment Justice Kennedy first announced his resignation, LDF has cautioned against proceeding with a nomination and confirmation to the Court until the close of Special Prosecutor Robert Mueller’s probe that has already yielded over thirty criminal indictments. Since then, events have only heightened the need for caution.  Advancing a confirmation process for a lifetime appointment to the Supreme Court while evidence of potential misconduct by the President and members of his campaign team and administration continues to mount, undermines the legitimacy of the confirmation process and, ultimately, the integrity of the Court.  It is also an affront to the will of the American people who deserve an opportunity to register their views on the composition of the Senate, which is charged with the duty to ‘advise and consent’ on the next Supreme Court nominee, in the imminent mid-term elections.”

In addition to the growing cloud of suspicion surrounding this presidency, the Senate Republican majority is attempting to advance this confirmation process before large portions of Judge Kavanaugh’s record have been made public. The undisclosed documents are extremely relevant to assessing his qualifications and fitness to serve as a Supreme Court justice. Specifically, the documents relate to legal work he did as a public servant in the Executive Branch, a period which Kavanaugh himself has said was “the most interesting and informative” in preparing him for judicial service. Without these documents, it will be impossible for the Senate to responsibly and effectively evaluate this nominee and fulfill its Constitutional obligation to “advise and consent.” Yet, even with limited access to his full record, LDF has found cause for concern about Kavanaugh’s judicial values on matters of civil rights and racial justice.

For the last 30 years, LDF has evaluated the records of Supreme Court nominees, sharing its conclusions about a nominee’s record to contribute to the public understanding of the judge’s record on civil rights, racial justice, and related issues. Our report on Judge Kavanaugh follows in that tradition and lays out concerns in the following areas:

These and other concerns detailed in our report should compel the Senate to halt the scheduled hearings and suspend the confirmation process.  Congress must take seriously its responsibility to offer advice and consent on judicial nominations by reviewing the nominees full and complete record, especially on the issue of civil rights. The Senate cannot do so without a complete record and should not do so under the unprecedented conditions of this embattled presidency.  LDF encourages all Senators – Republican and Democrat alike – to review this report in detail and halt all further action on Judge Kavanaugh’s nomination.

Republicans: The Party of Whiteness in 2018