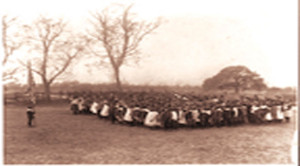 The first African American Memorial Day is the commemorated

This occurred in Charleston, S.C. to honor 257 dead Union soldiers who had been buried in a mass grave in a Confederate prison camp. They dug up the bodies and worked for two weeks to give them a proper burial as gratitude for fighting for their freedom.

Together with teachers and missionaries, Black residents of Charleston organized a May Day ceremony that year which was covered by the New York Tribune and other national papers.

The freedmen cleaned up and landscaped the burial ground, building an enclosure and an arch labeled, “Martyrs of the Race Course.” Nearly 10,000 people, mostly freed-men, gathered on May 1 to commemorate the war dead. Involved were about 3,000 Black school children newly enrolled in Freedmen’s schools, mutual aid societies, Union troops, Black ministers, and white northern missionaries. Most brought flowers to be placed on the burial field. Years later, the celebration would come to be called the “First Decoration Day” in the North.

David W. Blight described the day: “This was the first Memorial Day. African Americans invented Memorial Day in Charleston, S.C. What you have there is Black Americans recently freed from slavery announcing to the world with their flowers, their feet, and their songs what the war had been about. What they basically were creating was the Independence Day of a Second American Revolution.”

Today the site is used as Hampton Park.