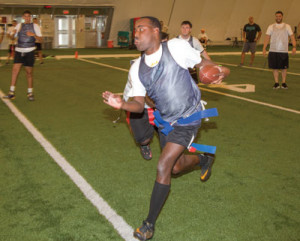 Time spent giving back has no price tag 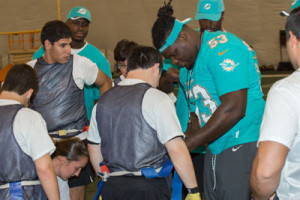 Time is one of the most precious gifts you could give, and the Dolphins Rookie Class gathered at the Dolphins training facility to spend some time with the Special Olympics Florida athletes from Miami Dade and Broward County.

The rookie class, as their first community event as members of the organization, got a chance to referee the flag football games played with Special Olympic Florida athletes, grades 6-12 and took group pictures at the end of the event.

The smiles on the faces of everyone there was enough to brighten up a room. One Special Olympic athlete, MaxMogul, had a good time. “My favorite part was everything,” he said.

“What I liked the most was to come out here with the Dolphins and we feel so special to play with the players. It’s very touching and very nice.” “We are thrilled to return to the Dolphins Training Facility for our annual clinic with the rookie class,” Special Olympics Florida Area Director Linsey Smith said. “It is one of the highlights of the year for our athletes to have the opportunity to train on the same field as their idols. We are grateful to the Miami Dolphins for providing this memorable experience each year.”

To be able to grow up in Broward and Dade County watching the Dolphins play and having the chance to play on the same field as some of their favorite players must be heartwarming for them.

Dolphins rookie Charles Harris has worked with special needs kids before, and when asked what he expects he was preparing for, he stated,” a lot of questions and a lot of energy.” He also said that this was a rewarding experience.

Harris said, “Of course, hands down. Whenever you see somebody else give it their all in something that you do yourself, it makes you go harder as well.”

Harris is not the only Dolphin to work with special athletes. Defensive tackle Vincent Taylor also has.

“To me, it’s all about giving back, Taylor said.

Time is more valuable than any physical gift you could ever give. Time is precious and can’t be received back once it’s gone, so to spend time with someone is valuable and so for the Rookie Class of the Miami Dolphins this time was well spent.

Once week 16 concludes and the last game of the year is played by your team then it only signifies the end of the NFL season. However, once the regular-season ends and your team is […]