It’s 2017, and the era of running backs seems like it’s coming to an end in the NFL.

Two weeks ago at the Hall of Fame ceremonies, important words were spoken. San Diego Chargers legendary running back LaDainian Tomlinson uttered these words while he was in Canton, Ohio. 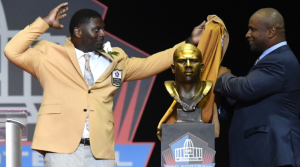 Keep in mind, that Tomlinson is walking into the Hall of Fame because of the emphasis on the running game. It’s also one of the reasons why he’s one of the greatest to ever play the position.

Although in today’s NFL it’s rare for running backs to serve as the main feature of the team, in Miami, it’s much different. Last year the Miami Dolphins ran their way to a wild card berth after winning 10 games. The biggest factor in their success was their running game. Last year starting running back Jay Ajayi ran for a career-high 1,272 yards and eight touchdowns. Ajayi also posted an outstanding 4.7 yards per carry average. Ajayi made the Pro Bowl and made the NFL Top 100. To say the Dolphins won’t be looking for him to repeat success would be foolish.

After facing an early season concussion, Ajayi has been slowly working his way back into the fold of the Dolphins running game. On Thursday against the Baltimore Ravens, Ajayi ran for a pedestrian negative two yards on only two carries. The important aspect is making sure Ajayi starts the regular season healthy.

“It was good, good to get back out there with the team. (It was) nice to get first reps of the new year” said Ajayi after Thursday’s game.

However, because of the success of last year, it’s no surprise that this year we expect the Dolphins to continue the trend with their running game. Since most teams will have a game plan ready for the Londoner, Miami will have to use other weapons in the stable including second-year running back Kenyan Drake.

This preseason, fans and observers of the Dolphins should keep a close eye on the game on the running game Miami implements. The preseason is a reservation for vanilla play calling and not showing too much too soon. However, we know that this season the Dolphins will be using their running game heavily.

Drake showed some flashes of greatness in the preseason, albeit against the second-string, still ran well. Drake finished his lone preseason contest against the Atlanta Falcons going for four carriers for 21 yards. Shortly after, leading into Thursday’s game Drake found himself with a concussion in practice and wasn’t able to suit up against the Ravens.

“I talked to him,” Ajayi said of Drake. “He’s [Drake] in good spirits. I guess he kind of saw what I went through, so he should be encouraged by it. It won’t be too bad.”

So what did Adam Gase knowing that his two most important running backs were hurt? He used his third-stringer, Damien Williams who had 11 yards on 4 carries. Nevertheless, the most impressive running back on Thursday was Senorise Perry who played awesome rushing for 24 yards and a touchdown on five carries.

The first TD of the night belongs to Senorise Perry (@SenoriseP) of the #Dolphins pic.twitter.com/n4ZwJcKT9w

Earlier in the week tight end Julius Thomas also chimed in about the wonders of the running game. A balanced offense could do miracles for the roster. Having a strong running game is going to open up so many opportunities for everyone on the team.

“The goal is to be a really balanced offense. When you have a lot of skill position playmakers around you, that makes everybody’s job easier. With our running game, with our receivers, that’s really going to give us tight ends an opportunity to make plays and do different things to go out there and help our offense perform at a high level.”

What the preseason has shown everyone in Miami, is that Adam Gase is going to make sure each opponent will get a heavy dose of the running game. Hopefully, Miami can run their way to success this season.

RISE to Get Honored With An Award From ESPN

Equality, unity, and opportunity. These are three of the fundamental principles that make athletic competition great. These values are expressed normally in athletic matches, but not always in society. That’s where the Ross Initiative in Sports […]

Our Heroes of Broward initiative will exclusively focus on acknowledging the unsung heroes of our community. From the schoolteachers that spend extra hours and extra money out of their own pockets to provide their students an atmosphere that is conducive for learning. To the childhood friend who opened the doors to their home without hesitation to raise someone else’s child. We feel an obligation to identify and praise these remarkable people. These are our Heroes and here are their stories. […]