The Westside Gazette Newspaper it honored to feature these editorial contribution made by local students. 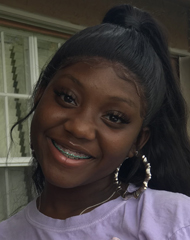 Over time the term for African Americans changed. We started off as negro and as time went on the, name of our ethnicity and race changed. From negro to Black to African to Black  African to African Caribbean and now we are considered African Americans. Let me educate the ones that need to be educated. The term negro is a Spanish word which means the color Black. It was used by White Europeans as a shortened form of Negriod to describe the people of sub-Saharan African heritage. They used the word negro until the mid-20th Century.

“Black Lives Matter”– everyone is shouting it loud and clear and for the ones who don’t agree are angry but at the same time are in fear. There are more people protesting than the ones who are against equality. If we go back in time , people like Nelson Mandela, Mahatma Gandhi, Dr. Martin Luther King Jr., Muhammad Yunus and many more were protesting injustice. Despite the fact that many people  have walked, fought, and spoken on equality we are still fighting to this day.

Where is the change?

Why can’t African Americans walk without being questioned, bullied, and attacked?

The color of our skin makes other races and ethnicities scared, but at the end of the day we are afraid to walk down the street without getting beaten, killed or attacked. Black is beautiful but other people see  us differently, 2020 is the year of change; the future is in our hands! So the big question is how will this generation make a change to make all of this stop?

We all have a voice – every race, ethnicity, age. Africans Americans are now fed up and we want our voice to be heard.

All good things must come to an end

School is coming to an end. And still, a lot needs to be done. I have to get all my school work finished and make sure my little sister stays on task. It was hard not having a teacher these last couple of months, but I stayed focus and whenever I needed help my aunt and grandparents were there to assist me. […]

One thing I learned about myself during this pandemic is the love I have for my community. I wanted everyone to know how important it was to wear their face masks and to social distance yourself from others. […]

Racism and white privilege at its best

Growing  the Voices of Our Future […]